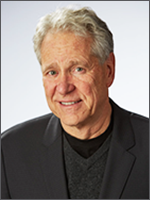 Hall left the classroom to teach math on television in Los Angeles on an Emmy-winning instructional program. He spent 20 years in K-12 districts teaching and leading staff development, and went on to lead a media consortium serving elementary, high school and K-12 districts with a total enrollment of more than 400,000 students.

He has founded and worked with student media festivals across the U.S., including the nation’s oldest, the California Student Media Festival. Hall served on the board of CUE, ISTE’s California affiliate, for the maximum six years, and currently serves on other nonprofit education boards.

After nearly 30 years in public education in two states, he joined Discovery Education in 2005 to help build a teacher community connecting more than a million teachers nationwide. There, he blogs, creates webinars and works in educational partnerships. Hall has spoken about technology and education to audiences around the world.

He believes ISTE is a prime mover for the amplification of teaching and learning. He is the father of two, including one teacher.

ISTE Board of Directors