Seven months after the fiscal year began, House and Senate negotiators finally clinched a deal on fiscal year 2017 (FY17) appropriations and President Donald Trump signed it into law the first week in May. While the final bill cuts approximately $60 million from education programs, these cuts aren’t as deep or as damaging as the cuts Trump just proposed for FY18, including zeroing out Title IV, Part A entirely.

The biggest news for edtech in the FY17 budget cycle is Congress’ decision on how much funding to provide for Title IV, Part A, the new flexible block grant in the Every Student Succeeds Act (ESSA) that houses the education technology program. Established to consolidate some 25 previous programs and their varied subject areas, the Student Support and Academic Achievement Grant program (SSAE) was authorized to provide $1.65 billion in formula grants for districts to spend on health and safety programs, well-rounded academic programs and education technology. However, in SSAE’s first funding year, appropriators agreed to only a $400 million FY17 appropriation, roughly one-quarter of its authorization level. As this low funding level could not support meaningful formula allocations to districts, Congress has offered states the option of operating the program as a competition in FY17. Additionally, Congress increased the limit on infrastructure funding from 15 percent to 25 percent for states that opt to run competitions. The limit is in place to ensure that the majority of the funding is intended to be used to support teacher training around effective use of technology.

Rules for the optional Title IV, A grant competition in 2017

• If a state chooses to run the competition, the state must preserve the integrity of the buckets. For instance, a state receiving $1 million would have to ensure that at least 20 percent of funds are distributed to districts for safe and healthy programs, 20 percent for well-rounded programs and the remaining 60 percent for any or all three of the programs (safe and healthy, well-rounded, technology).

• It's up to the states to determine what they want to do with the "60 percent bucket" They could specify what districts could apply for, or they could allow the districts to determine how to spend the money.

• Districts can apply for one, two or all three of the buckets and must complete a needs assessment prior to applying to receive funds from the state.

• Priority must be given to high-needs districts while ensuring geographic diversity among sub-grant recipients representing rural, suburban, and urban areas. This will ensure that rural and urban districts are equally able to receive funding.

• Districts will have until September 2018 to obligate the funds.

ISTE CEO Richard Culatta expressed concern with the funding level, saying: "While we are happy for compromise in Washington, the agreement leaves the Student Support and Academic Enrichment Grant without the ability to carry out the full scope of its mission. For those school districts desiring to leverage the power of technology to personalize learning, close opportunity gaps or provide professional development, receiving a fraction of expected funding will require them to defer their dreams for at least another funding cycle. In my view, this is a less than optimal outcome when we are trying to prepare students to thrive in a connected world."

A coalition of more than 50 education groups, of which ISTE is a leading member, said: “We are deeply disappointed in Congress' decision to fund the SSAE grant program (Title IV, A of ESSA) at $400 million, which is just 25 percent of its ESSA authorization level. From our perspective, this level of funding undermines Congressional intent to give states and districts the flexibility to make meaningful investments in a range of programs … We urge states to seriously consider the competitive option offered in the FY17 Omnibus Appropriations Bill as a way to ensure that many, albeit not all, of their districts receive funding at levels sufficient to make a difference."

ISTE will continue to call for maximum funding for the SSAE program in FY18 and beyond so that states and districts can make the critical investments in technology.

One of the most interesting themes of the final FY17 appropriations bill is how much Congress ignored the president’s wishes. For instance, President Trump proposed to cut Title II, Part A of ESSA (funded at $2.3 billion in FY16) in half. Title II supports the recruitment, retention, preparation and professional development for teachers and school leaders. Congress pushed back on this proposal, cutting only $294 million from Title II, A, which represents a 12.5 percent cut – a hefty decrease, but far less than the president’s 50 percent cut. Similarly, President Trump sought to eliminate entirely the $1.1 billion 21st Century Community Learning Centers program that supports after-school programs. In the final bill, congress actually increased the program by $25 million. It remains to be seen whether Congressional priorities or those of President Trump will win out in the next funding cycle.

"The president’s FY18 proposal to provide no money for the Student Support and Academic Enrichment program of the Every Student Succeeds Act would deal a body blow to efforts of educators across the country to provide all students with the best education in the world. No money for Title IV Part A would mean no dedicated investment for supporting teachers using technology to personalize learning, teach computer science or support quality online learning options. It means that once again the future of our children is at risk because of shortsighted and uninformed policy decisions. I implore Congress to support teachers and students by funding this vital program at its authorized level of $1.6 billion, thereby fulfilling the bipartisan vision of the Every Student Succeeds Act."

April was ISTE’s Advocacy Month and your efforts made an impact! You attended town halls, tweeted and called your members of Congress on various issues, including E-Rate and technology funding. You don’t need to be a lobbyist or trek to Capitol Hill in Washington, D.C., to have your voice heard. You can be an advocate from anywhere – and you don’t need to be a policy wonk to make a difference.

Here are a few ways to remain involved:

Attend a town hall – Attending a town hall is a great way to meet your member of Congress in the district to talk about the issues you care about in an open and informal way. Go to the websites of your senators and congressional members to find their recess schedules, sign up to attend and go prepared to share your experience as school leaders and the importance of funding technology to improve student learning and prepare students for the workforce.

Meet in the district office – Meeting with your member in the district is critically important to establishing and/or maintaining a relationship and ensuring your issues continue to be heard by the member and their staff. The stories and examples you share and the concerns you address will be relayed to the member by district staff, having the same effect as meeting on Capitol Hill. If you need talking points or help understanding the federal policy issues, ISTE is always able to provide material and leave-behinds for your meeting.

Advocate from home or your phone – Technology makes it easy to be an advocate and social media has the power to amplify a message, especially when thousands of people make a message go viral. Nowadays, senators and representatives pay close attention to social media and often respond to the issues that get significant traction in the media. You can advocate from anywhere by sending this prewritten letter directly to Congress, posting on their Facebook pages or tweeting to your members using these sample tweets:

• Give schools the funding to provide students with a well-rounded education @[Congressperson] #Act4EdTech #MoreTitleIV.

Feeling old-school? Submit an op-ed to a local newspaper about how technology benefits students and learning in the classroom. Members of Congress read their local papers to find out about the issues affecting their constituents!

Remember, your elected officials are serving in Congress to represent you and your concerns as their constituents – it’s important that they hear from you regularly and via different mediums.

ISTE is grateful for your continuing advocacy and is committed to amplifying your voice as an educator using technology to advance student learning at the national level.

ISTE, the Consortium for School Networking (CoSN), and the State Education Technology Directors Association (SETDA), in conjunction with Center for Digital Education hosted a two day advocacy summit May 11 - 12 that attracted over 100 educators, representing 30 states. At the summit, attendees sharpened their advocacy skills in specific issue trainings led by ISTE’s legislative counsel and then used those skills to advocate for E-Rate and Title IV, A during meetings with their members of Congress on Capitol Hill and with the commissioners of the Federal Communications Commission (FCC). One ISTE attendee called the Summit "the most empowering and meaningful advocacy experience in my career so far." Adding, "Without ISTE’s advocacy team my efforts to effectively educate lawmakers wouldn’t have been possible." 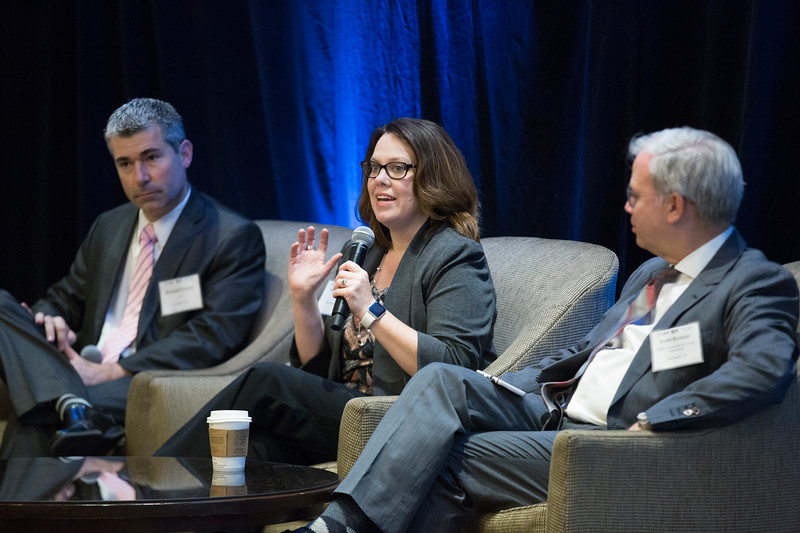 After a successful day on Capitol Hill educating members of Congress about the importance of investing in technology in education, participants attended a reception that featured opening remarks from ISTE CEO Richard Culatta who spoke about the power of individual and collective advocacy to advance our shared missions. Given the excitement, momentum, and sense of empowerment in the wake of this summit, ISTE plans to continue our collective advocacy efforts in the near future. Stay tuned via the ISTE Advocacy Network for more direct advocacy opportunities! 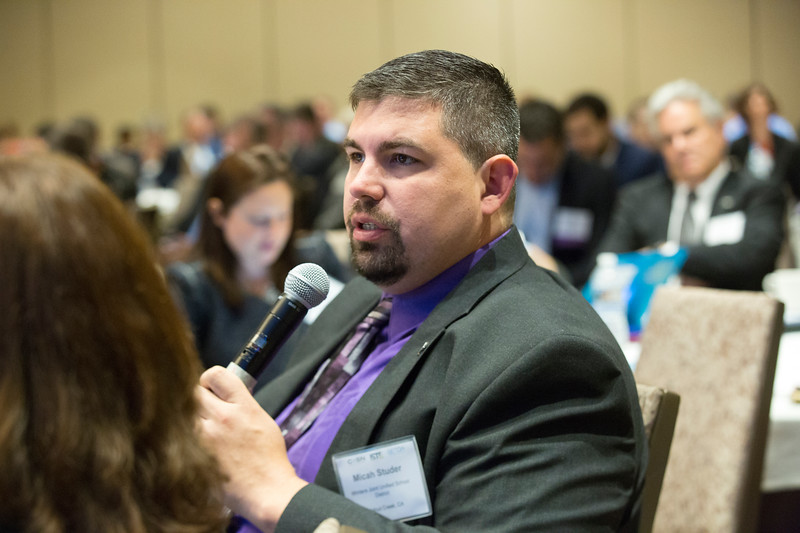 COMING TO ISTE 2017? JOIN US FOR ADVOCACY SESSIONS

And don’t forget to visit the advocacy booth in ISTE Central and enter the raffle to win an Amazon Alexa!