Reflections on coding from an open-minded skeptic 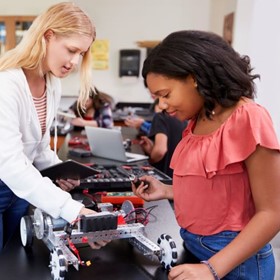 “We’ve come full circle since 1981.” That was my first thought a few years ago, when I began to hear about the necessity of teaching coding in K-12 schools.

Back in the 1980s, programming was the buzzword. Logo, BASIC and Pascal programming were required classes for the Computers in Education master’s degree at Lesley University, where I have worked for 36 years.

It was all new and exciting, being able to use these “powerful” machines to develop customized classroom activities. Many of us loved the precision and planning that a good program required.

In the 1990s, however, programming classes gave way to instruction on how to integrate commercial software in creative and thoughtful ways. Multimedia tools, internet resources and innovative teaching provided ways for students to create original content in a constructivist collaborative way.

These days you can’t go to a conference or read about edtech without being bombarded with references to coding in the classroom, the current variation of programming. From Scratch Junior for kindergartners to courses on Python for high schoolers, the trend is growing.

This is partially driven by economics, of course. The need for college graduates in computer science, based on industry needs and job openings, is well documented. Departments of education are responding. Educator licensure programs are increasing.

Aside from the needs in the marketplace, though, what are the benefits in terms of learning, student engagement and long term outcomes? Why is there a resurgence of an activity that, years ago, we abandoned, particularly in the lower grades? Why is it being suggested for all grades and all students?

I did some research to find answers to these questions. To do so, I first looked back through the decades to see how we got here.

1980s: Channeling Papert and a classroom revolution in programming

Armed with our copies of Mindstorms, Seymour Papert’s 1980 revolutionary text, computer-savvy educators at the time embraced the programming language of Logo, developed at M.I.T. We sent the little green triangular “turtle” around the screen. We experimented and explored, often with no clear goal in mind.

We provided our students with challenges that could have multiple solutions and no right or wrong answers. We learned to become “guides on the side,” figuring things out alongside our students. We were humbled when our students found a solution before we did. Sure, our classrooms were loud – even chaotic – but the noise was caused by exuberant bursts of enthusiasm, coupled with high fives and big smiles.

Truth is, a tremendous amount of learning was happening. We hoped that any administrative observers understood that the noise came from exciting revelations and satisfied exclamations of successful adventures. I believed that there would never be another classroom with desks nailed to the floor and demerits for talking out of turn.

We talked about how the planning, the need for precise commands and the visual feedback were good for the brain. We believed that the collaboration and cooperation that came with group projects helped build good citizens and valuable workers in future workplaces.

The theory was that as better software became available, the average teacher did not have to know programming. Education publishers were creating software in all subject areas and grade levels. Some of it was basically electronic worksheets — drill and practice masquerading as colorful games.

But there were also simulations that allowed students to dissect frogs, travel the Oregon Trail and run a small lemonade business. Tools like word processors, spreadsheets, databases and multimedia programs became more affordable and very powerful. Students were encouraged to be producers. Creativity soared.

Eventually, most standalone software applications evolved into websites, and then into apps. Some had monthly or yearly subscriptions but many were free. When the first iPhone was introduced in 2007, the development of apps offered new opportunities on mobile devices. The number of apps increased exponentially, and educators took advantage of the portability and accessibility.

Using phones and tablets, students could learn from virtually anywhere – on the bus, outside on the grass, in a store or café. 1:1 iPad schools blossomed and students began using tablets in the classroom to read using personized reading programs, watch tutorial videos or collaborate with peers on projects.

Equipped with curiosity and anecdotal evidence, I did some additional research and gathered data and resources. I began to see patterns, summarized the findings and compiled a list of the benefits of teaching all students to code:

1. Coding involves and improves problem-solving, creativity, perseverance and collaboration.
2. Students graduating with coding experience are in demand in the workplace and have a competitive advantage.
3. Coding activities can be engaging, interesting and fun.

Many believe that the infusion of computer science into K-12 classrooms will lead to more college degrees in computer science, and, as a result, an increase in employment in computer science and related fields, particularly for people of color and for women. Girls who Code is a job-coaching, job-posting and internship program that has been instrumental in closing the gender gap in tech.

While I’m still not convinced that every child should have multiple coding classes, I have a new understanding that in many cases, coding clearly provides exciting learning experiences, and, for some, it is opening up opportunities and changing lives.

Maureen Brown Yoder, Ed.D., is a professor of educational technology at Lesley University in Cambridge, Massachusetts. A former classroom teacher, she currently works with in-service educators and teaches an online course on emerging technologies. She coined the term electronic constructivism and has written extensively on how to thoughtfully and creatively integrate emerging technologies into existing curricula.