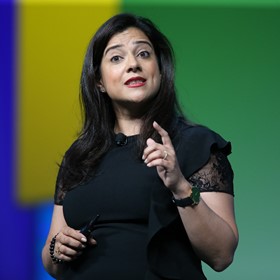 Coding, at its core, is about failure.

It’s hitting dead ends and finding what’s in the wrong place. You have to fit with imperfection and revel in challenge.

That’s exactly where ISTE 2017 keynoter Reshma Saujani found herself on a spring night in 2010 as she watched her candidacy for a seat in the U.S. House of Representatives pull only 19 percent of the vote. The former lawyer had quit her job, spent 10 months campaigning and was broke, humiliated, and left with no contingency plan.

But a Congressional run means you stop in a lot of schools. Saujani had noticed something puzzling: the computer labs were full of boys, busy at their tasks, dreaming of becoming the next Steve Jobs or Mark Zuckerberg.

Where were the girls?

Certainly the tech industry is hungry for employees. According to Saujani, there are 500,000 open jobs in computing technology. Seventy-one percent of STEM jobs are in computer science. But in 2016, the United States only graduated 40,000 computer science students. China graduated 350,000. Software programmers can make $120,000 a year  living away from the coasts.

And still the number of women in the field is dropping. In 1995, women made up 37 percent of the tech workforce. Today it’s 24 percent, and analysts say we’re on track for only 22 percent in 2025.

Fixing that gap became Saujani’s passion. And her research has seized on some solid cultural reasons for this decline.

For starters, you cannot be what you cannot see, as Saujani told the audience, and she pointed out that today’s movies featuring STEM jobs depict boys who haven’t showered in days, live in the basement and knock back Red Bulls while staring at their screens.

“Little girls look at those images and they say, ‘Not only do I not want to be him, I don’t want to be friends with him,’” Saujani said to laughter.

More alarming, it’s socially acceptable for females of any age to say they aren’t good at math or science.

But most fundamental of all, Saujani pointed out, is the idea that society coddles and protects girls. Boys are taught to take risks and become comfortable with rejection. “We haven’t let our girls know what it’s like to be average, to be not that great,” she said. “And so when they feel like they’re imperfect, they can’t handle it.” Indeed, in many coding classes, girls will turn in a blank screen rather than show code that didn’t work.

So Saujani founded Girls Who Code, a nonprofit program to give girls a hand up on the topic. Since 2012, the program has spawned 80 summer immersion programs and 1,000 clubs where girls learn coding, robotics, website development and app making. To date, Girls Who Code has reached 40,000 girls in every state, and 90 percent of alumnae have declared or intend to declare a major or minor in computer science. Saujani’s organization provides volunteers with training and materials to launch a club at no charge.

This fall, the program will branch out into literature, offering fictional stories that feature female coding clubs in an effort to normalize the concept.

But why would Saujani kiss her family good-bye and spend so much time on the road explaining her brainchild? She admitted that gender parity for its own sake doesn’t appeal to her. Instead, her heart belongs to the real-life issues women choose to solve using coding.

“To me, it’s bigger than just closing the gap. I do this work because I believe there will be so many innovations that are left on the sidelines if we don’t teach girls to code,” she said.

To explore how you can get involved, email Saujani at Reshma@girlswhocode.com.