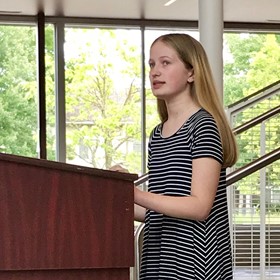 Student activists at Florida’s Marjorie Stoneman Douglas High, who attracted global attention by demanding better gun laws after 17 of their classmates were killed inspired some Eugene, Oregon, students to take on a civic engagement project of their own.

The students in Jenoge Khatter’s U.S. History class at Roosevelt Middle School were looking for a topic for their Project Citizen unit, a project-based curriculum from the Center for Civic Education and the Classroom Law Project.

Project Citizen guides classes through the steps of developing an action plan to solve a problem selected by the students. Khatter’s history class considered addressing mental health, earthquake preparedness or climate change. But when the Florida shooting happened, the students knew they wanted to add their voices to the conversation about gun violence.

Students gathered information and considered options for possible solutions. Khatter’s class started with internet research and then developed questions to ask various experts. It was not as easy as it sounds. The class reworded and rephrased the questions numerous times in order to find non-confrontational questions that they could all agreed on.

To understand multiple perspectives on the topic, students interviewed a variety of people with different viewpoints, including Oregon Gov. Kate Brown, state Rep. Phil Barnhart of Eugene, a survivor of a 1998 Oregon high school shooting, representatives from the NRA and members of the local Republican Party chapter.

“Talking to experts from the other side reinforced my feelings,” said student Maren Nixon. “While they did make some good points, in the end it reinforced that I think we need more gun control.”

Students conducted face-to-face interviews but collaborated with each other using Google apps, primarily to evaluate and communicate throughout the project. Students also polled other local middle schoolers, parents and community members on a number of carefully selected questions.

The project was a natural fit for addressing the ISTE Standards for Students. For the Knowledge Constructor standard — which expects students to plan and employ effective research strategies to locate information and other resources for their intellectual or creative pursuits — students rated and prioritized ideas for how the project should move forward continuously via online surveys. This included deciding which questions should be on the survey and how responses should be summarized.

These activities also address the Global Collaborator Standard, which instructs students to use collaborative technologies to work with others, including peers, experts or community members, to examine issues and problems from multiple viewpoints. Students contributed constructively to project teams, assuming various roles and responsibilities to work effectively toward a common goal.

The culmination of Khatter’s project was to present their findings to a panel of local leaders, which allowed students to meet ISTE's Creative Communicator standard, which expects students to communicate complex ideas clearly and effectively by creating or using a variety of digital objects, such as visualizations, models or simulations, and also publish or present content that customizes the message and medium for their intended audiences.

Students used digital applications and media to present the project to a panel of local leaders. One of the panel’s members, Sen. James Manning, Jr., invited the students to present their findings to members of the Oregon Legislature.

“This was an incredible experience, and I've been consistently impressed at the curiosity and serious care for society that students demonstrated,” Khatter said.

Actively involving students in their communities

Started in the 1980s to celebrate the bicentennial of the signing of constitution, Project Citizen aims to get students actively involved in their communities, to understand how policy is developed, and to develop an action plan and present it to government leaders.

“People get frustrated with government because we think product is most important, but the process is just as meaningful and has a longer lasting effect,” says Cari Zall, senior program manager at the Classroom Law Project. “We want the answer and end product but don’t understand how to get there. Project Citizen is the middle piece. It’s challenging and takes work to get to a solution.”

Zall says that this project is one example of many that students have produced over the last 30 years. Other classes have addressed homelessness, financial literacy and a variety of other issues facing their communities.

While students have been using technology to research and produce Project Citizen projects for years, students are starting to tackle technology issues, such as cell phone use in schools. Several student groups have tried to come up with alternate policies for school districts, arguing how tech can be useful in an educational environment.

“With only a little over 40 states requiring civics education for graduation, Project Citizen is needed more than ever,” Zall says. “A project like this is a great way to get students engaged in how to be part of a solution.”