Students use grief, passion, technology to create a movement 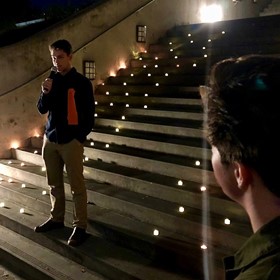 Following the Valentine’s Day shooting in Parkland, Florida, the world saw teenagers being self-directed and empowered as they pursued a real-world project they felt passionately about. It saw students being dynamic digital citizens, using social media and other web platforms to engage proactively on an issue and to push back against cyberbullies and misinformation.

These students were not undertaking a project assigned by their teachers or in preparation for college or career. These were a select group of students from Marjory Stoneman Douglas (MSD) High School rallying against gun violence.

The details are known to most of us. On Feb. 14, 2018, a shooter, a former classmate, walked into the school and killed 17 people, including students, teachers and coaches. The details were at first as horrific as they were familiar, and it seemed that this story of a mass shooting would quickly fade from U.S. media and memory as so many others have in the last decade. But the students of this particular school were not going to let that happen without a fight.

First, because this shooting happened at a high school with a non-restrictive cell phone policy, the students were live tweeting, texting, videoing and otherwise recording the attack as it happened. From the get-go, many students onsite used digital tools to not only witness what was happening but to make the world witnesses as well. They created a crushing, poignant record of the violence and terror.

In the aftermath, resolved in grief and frustration, a group of students came together, determined to do something in response, determined to not fade into the ether of “regrettable” statistics. As high schoolers, they do not yet have the right to vote so they gathered the tools they do have at their disposal as they launched a movement called “Never Again.”

When advocates of education technology talk about the ISTE Standards and digital tools used to change teaching and learning, we often give examples built within traditional subject areas and focused on feel-good activities by students. The “Never Again” students exhibit the ISTE Standards for Students in action, but in a way that reminds us we are not only preparing students for academic or career achievement, but also for life in a complicated, messy, often brutal world.

These students built a webpage and a logo for their new movement. They began giving interviews to major media outlets and viral-worthy speeches at rallies and protests. They used social media to share their truth and mourn their classmates. They also used Twitter as a means to push back against conspiracy theorists and trolls.

They are coordinating a nationwide march on March 24 and pushing hard on our elected officials at meetings, town halls and online. They have shown how personal authenticity coupled with digital tools and media can be a powerful means to insist on change and a seat at the table.

As someone immersed in technology in education, I could not ignore the dark irony of a technology designed for violence coming unwelcomed into schools. But as the students of MSD have pushed back against the standard narratives and expectations, I am humbled and awed by the passion and savvy of these young people. They are a profound reminder of why education matters and of the fact that it is often the students, these so-called “digital natives,” who are best prepared to educate us all.

Sarah Stoeckl is a senior project manager in the ISTE Standards Department. She worked as a writing and literature teacher before becoming an administrator, writer and project wrangler.
Tags
Digital Citizenship