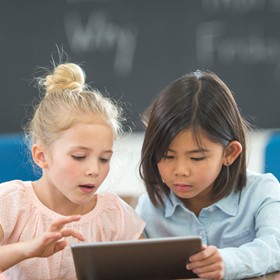 In many classrooms, educators use games to teach math or science concepts in the cognitive domain – learning focused on acquiring knowledge about processes, procedures and principles.

But educators are discovering the benefit of educational games that help students understand what it’s like to walk in another person’s shoes and promote multicultural understanding.

Teachers familiar with games like Darfur is Dying or I Can End Deportation — some of the earliest games in what’s been called the “games for good” sector — might be surprised to find that the latest games look at multiculturalism through a new lens.

Kae Novak, chair of the ISTE Games and Simulations Network, says this approach gets away from multicultural lessons based in heroes and holidays, and helps students develop understanding, feelings, appreciation and attitudes.

“The idea is that the end action of anything related to multicultural curriculum reform is social justice and social action,” says Novak, who is an instructional designer for Front Range Community College in Denver.

The latest games encourage students to develop a critical consciousness by considering what it would be like to take on the role of a person from a different background. The experiences lead students to ask: What would it look like if this was happening to me? Who’s stories aren’t being told? What voices aren’t being heard? And what can we do about it?

This classic, but still relevant, flash-based video game gives students a window into the experience of the 2.5 million refugees in the Darfur region of Sudan.

Players take on the role of a family member living in a refugee camp and must negotiate the issues that arise in the camp, with a goal of getting access to water. The game was developed in cooperation with humanitarian aid workers with extensive experience in Darfur.

Novak has used this game in conjunction with a video about the genocide in Darfur, asking students to write essays about their experiences after playing the game.

Inside the Japanese Internment

This interactive fiction (IF) game has players take on the role of a prisoner in a Japanese internment camp in 1941. Players are faced with decisions like those prisoners experienced, including whether to answer "yes" or "no" to a loyalty questionnaire, whether to join the growing resistance movement or stay quiet and whether to throw one's lot in with one's country or one's race. Students see that every decision they make has a consequence and that sometimes there are no good choices.

Novak says this game, like others in the IF genre, resembles a choose-your-own-adventure book.

In this IF game, players must decide whether to leave their home country of Syria or remain. If they choose to migrate, they must make tough decisions as they travel the path many Syrian refugees have taken as they try to reach Europe.

“Students might have heard of Syria or read a newspaper article about Syrian refugees, but they don’t really understand what the refugees now living in Europe went through to get where they are,” Novak says.

More meaty than some IF games, Hacked has players take on the role of a journalist tracking down hackers in the Middle East and Europe. A journalist avatar must decide which sources to believe and how and when to follow up on sources’ credibility. Players also learn about investigative journalism, fake news and the decision-making skills reporters have to develop.

Many of the games Novak recommends emerge from The Interactive Fiction Competition, an annual event that encourages the creation of new interactive fiction works. Developers upload new games, and crowdsourced judges play and rate as many games as they can in October and November. Winners are announced in November.

Teachers can also find vetted games for teaching multiculturalism at Games for Change.