Being the change we seek: How diverse voices strengthen schools 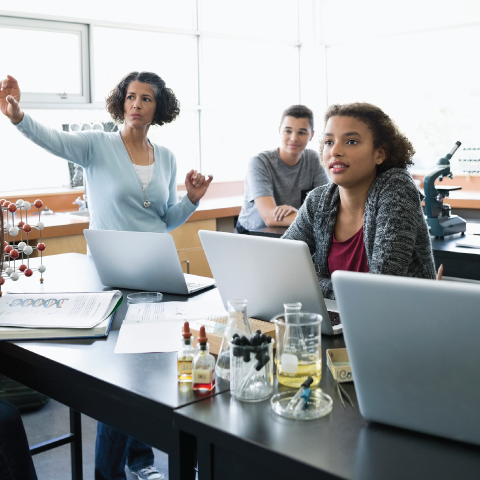 Diversity and equity are threads running through the quilt of our national conversation. Over the last few years, everything from #MeToo to immigration policy to the Black Lives Matter movement has intensified this conversation, pulling on that long historical thread and threatening to unravel the ties that bind our country.

Some of us may have thought for a brief moment that we were on our way past racism, sexism and discrimination based on sexual orientation, religion or physical ability, only to be shocked by the hatred and prejudice simmering just below the surface.

And in spite of demographic shifts, policy changes and national equity movements, opportunity gaps still exist for underrepresented groups. Our schools, often a microcosm of larger society, are not immune.

In 2014, for the first time in U.S. public schools, the percentage of Latino, African-American, Asian and other students of color exceeded the percentage of white students, according to the National Center for Educational Statistics. While the full mosaic of America is evident in the makeup of our students, the fact is, teachers and educational leadership still look a lot like they always have.

This lack of diversity is true for school leadership as well. Only about 6 percent of school superintendents are nonwhite, and roughly 25 percent are women.

Multiple studies have suggested that students are often more successful when they have role models who look like them.

“A role model who looks like you can serve as that North Star who orients you,” says Luis Pérez, technical assistance specialist at the National Center on Accessible Educational Materials. “You can see a tangible representation of what you can accomplish. Regardless of where you start, there’s a blueprint for you to follow.”

Pérez speaks from personal experience. When he first came to the U.S. from the Dominican Republic at age 11, he struggled with language and behavior. He was assigned a social worker who was also Dominican. No educator was more important to him than that social worker.

“He was college-educated and became the person I wanted to emulate,” says Pérez.

There’s perhaps no place where it’s as important for students to see people who look like them than schools. Whether that means schools include people from diverse genders, races, ethnicities, abilities, income or backgrounds, the key is inclusivity at all levels, including edtech leadership. Diverse edtech leadership is an opportunity not only to increase empathy through connections, but also to increase innovation and creativity, and make our schools stronger.

What does inclusivity look like? If you’re a diverse voice in edtech, how do you get a seat at the table and a voice in decision-making? If you’re in a leadership role already, how do we find diverse voices and help amplify them? If you’re an ally for inclusion, what can you do to further the cause?

Here, we share the personal experiences of four edtech leaders:

Desiree Alexander is an award-winning education consultant and founder and CEO of her own company, Educator Alexander Consulting. When she receives an award or is accepted into a program, she’s often the only person of color or the only woman there.

“You always have this nugget in the back of your mind. Do the people there see you as someone who is accepted because of your worth or who was accepted to check a box? I’ve learned to get over it,” she says. “But for some people, it is a barrier because they don’t want to be seen as a pity hire.”

Even if she could forget she was different, there are subtle reminders. For example, when Alexander worked in a supervisory position at a school district, she had a male colleague who reported to her. Staff at the district would often go to the man to ask questions, even when he was standing right next to her.

“It wasn’t done because they are racist or sexist,” says Alexander. “It’s because that’s what they were taught and what they’re comfortable with. If we don’t stop and look at those things, it does become sexist or racist.”

Alexander has personally had to call out racist behavior. A company she was contracting with said it wanted to be more diverse and sent out a statement saying they were looking to hire more diverse people. That statement included reassurances that the quality of work wouldn’t lapse. Alexander pointed out that if they were putting out a statement that they were hiring more people generally, they would never feel the need to include a statement about the quality. Why did they feel the need to do so when stating they were diversifying their hiring?

“Some people talk a good game, but that doesn’t mean there’s not going to be sexism or racism,” she says. “I was further away from the table than I thought I was.”

Sometimes to get a seat at the table, you have to invite yourself, says Toutoule Ntoye, an instructional coach with Los Angeles Education Partnership and founder of Pivot-Ed, a nonprofit that supports student athletes. Ntoye says he’s not always invited to meetings, but if he has a stake in the topic, he will ask to attend or just show up.

For example, when a new program was being rolled out at his school, staff held a meeting about which students would participate. The project wasn’t in his purview, so he wasn’t invited, but he decided to attend and advocate for a greater diversity of students to be included.

Ntoye points to the example of the H&M advertisement featuring an African-American boy wearing a sweatshirt that reads, “Coolest monkey in the jungle,” widely considered racist. “We see many examples in the business world where they didn’t have a diverse group of folks making decisions,” he says. “There’s was clearly no one in the room who could have said, ‘That’s a bad idea.’”

That’s not always an easy task since we’re often naturally surrounded by people who look like ourselves. It requires school leaders to seek diversity. If you don’t see anyone who looks different than you, expand your circle by attending conferences or seeking out diverse perspectives on social media.

Equally important is making sure the diverse staff you already have is welcome. People often don’t realize they’re harboring bias. In that case, it’s the responsibility of those who see it to call it out for the good of everyone.

“If I’m feeling microaggressions from staff, students are probably feeling that, too,” says Ntoye. “We need to know how to identify it and get past it. We have to be courageous and make sure it’s an ongoing conversation, not just because it’s diversity day.”

Natalia LeMoyne Hernández: BELIEVING IN HERSELF

Natalia LeMoyne Hernández was 15 and living in her native country of Colombia when her father died. She and her mother moved to Argentina to live with her aunt in Buenos Aires, where Hernández finished high school and attended teacher training college. She moved to Fayetteville, North Carolina, on a Visiting International Faculty program.

There, she discovered that not everyone wants to listen to what you have to say when you speak with an accent. Fortunately, Hernández found someone who listened to her – a mentor who could relate. Her mentor’s husband was from a different country and had also experienced discrimination. She helped Hernández set up training across the district to share the innovative way she was using GarageBand to teach English language learners.

“The key was that someone believed in me, and I was then able to show by my actions through time that I’m knowledgeable and provide value,” says Hernández.

Hernández continued to grow professionally and earned certifications. These extra efforts have given her presence and respect in her new school district in New York. Although she still encounters discrimination, she now stands up for herself.

Hernández has a co-worker, whom she describes as very friendly and not intentionally discriminatory, who made a joking reference to a Latina character by calling her “Chiquita banana.” She says she knew he was a joke and didn’t let it fill her with anger and resentment, but she still needed to tell him that his jokes were not OK. Things changed for the better after that.

“If you approach someone with resentment or anger, that’s going to come back to you in some shape or form,” she says. “We should use these opportunities to teach.”

Luis Pérez: NOTHING ABOUT US WITHOUT US

Luis Pérez didn’t intend to end up in edtech. He was initially planning to go into IT, but a car accident led to his diagnosis with a visual impairment. He knew that the odds of employment aren’t not high for people with disabilities, but his technology background made him decide there was no reason for that to be the case.

“Technology levels the playing field for people with disabilities and allows them to showcase their abilities,” says Pérez. “So many technologies used in schools and the workplace are built in now.” For example, for people who struggle with typing, there’s talk-to-text technology.

That doesn’t mean there aren’t unique challenges. Pérez says most people with disabilities don’t expect others to know how to accommodate them, but it’s always appreciated when people ask if there’s anything he needs to participate in a meeting. Although people can feel uncomfortable asking, something as simple as that sends a powerful message of inclusive intentions.

Sometimes there’s a notice at the bottom of an announcement requesting that people ask if they need an accommodation. Pérez said when he was first diagnosed, he didn’t feel comfortable asking for accommodations. Now, he stands up for what he needs and encourages others to do the same.

While many people feel uncomfortable drawing attention to someone’s disability by asking about accommodations, Pérez says, please ask. If the intention is to make sure that the person’s voice is heard, the question is unlikely to be offensive. This is especially true if the conversation directly impacts others with disabilities.

“It’s important to feel you are listened to, you are valued,” says Pérez. “In the world of special ed, we call that self-determination. Nothing about us without us.”

Jennifer Snelling is a freelance writer and mom to two. She lives in Eugene, Oregon.