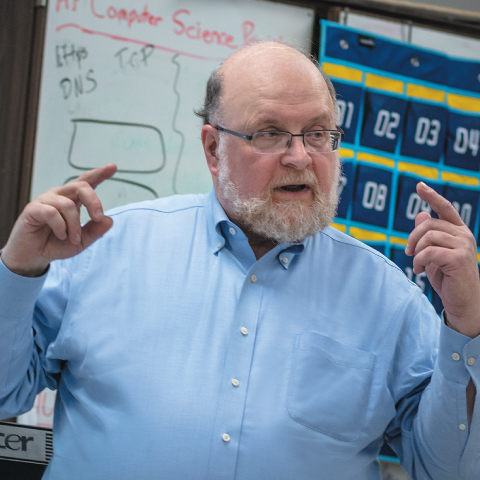 If there’s an initiative to boost computer science in schools, Joe Kmoch – one of ISTE’s longest-serving members – probably has a hand in it.

He helped develop some of the earliest K-12 computer science standards. He wrote grants securing $2 million in funding to train more than 250 CS teachers. He helped establish the Wisconsin chapter of the Computer Science Teachers Association, coordinates a statewide awards program for high school women interested in technology careers, and speaks at national STEM conferences.

And that’s just since he retired.

“A friend of mine regularly tells me I fail at retirement,” says Kmoch, a former math and computer science teacher who now works as an education consultant, helping schools develop CS curricula. “When I get up in the morning, I have to figure out which of five things I’ve got to do first.”

That’s fine with him. He’s been advocating for computer science education since the early 1970s, when he was a fresh-out-of-college math teacher with a growing fascination for computers. Those were the days of the Olivetti Programma 101, the first commercially available programmable desktop computer. It cost $3,200, had the bulk of an AV cart and weighed about 60 pounds. Only three other schools in his area had one.

“It had the capability of your watch nowadays,” he recalls.

When he couldn’t stop raving about it to his colleagues at Rufus King High School in Milwaukee, his department chair suggested he get one and start teaching computer science classes. His mission in life began to take shape: Get more students and teachers interested in CS.

After collaborating on one of the nation’s earliest career-readiness programs for data processing, he transferred to Washington High School, where he spent the rest of his teaching career building up its computer science program. By the end of the ’80s, with around 700 students taking CS classes, things seemed promising.

“The goal was to let kids get enough exposure to computer science so they could make some decisions for themselves as to whether they want to continue on with this or move on to something else,” he says.

Then the “dark days” of the early 2000s hit. Computer science landed on the chopping block in many schools, alongside music and art, because budget-strapped leaders didn’t see any value in it. Even within ISTE, where Kmoch led the Special Interest Group for Computer Science (now the Computer Science Network) for six years, interest in CS was waning.

“In some cases, I would go to math conferences and get myself on the program, and I was maybe the only person talking about computer science at the entire conference,” he recalls.

His persistence is now paying off. With technology permeating nearly every industry, the need for CS education has grown impossible to ignore. Corporate leaders have sounded the alarm about the increasingly dire shortage of professionals with computer science knowledge, and education leaders are finally listening. “CS for all” initiatives are sweeping around the globe, prompting entire states and countries to commit to teaching computer science to every student.

“CS for all is not about having a bunch of siloed classes,” Kmoch says. “It’s not about making sure everybody takes the intro to computer science class at the high school level. What it is about is infusing computer science concepts and computational thinking into all other subjects.”

His mission is still far from complete, however.

“In Wisconsin, there’s still the fact that only around 30 percent of the high schools offer any computer science at all, so we still have this gap,” he says. “A lot of schools are not doing anything. So more school districts, more school boards, have to be convinced that this is important for their kids – and in many cases, for the survival of their communities.”

Although he retired from teaching in 2004 to help care for his ailing parents, he hasn’t slowed down a bit. For him, retirement means he can continue working on his mission without having to worry about getting paid for it.

“I pretty much live this stuff,” says Kmoch, whose tireless efforts earned him the ISTE Making IT Happen Award in 2015. “When I’m 80 or 90, maybe the bowling thing will be fine, but right
now I want to stay involved. This is exciting stuff for me."