Vint Cerf says it's time to teach students how to learn, do 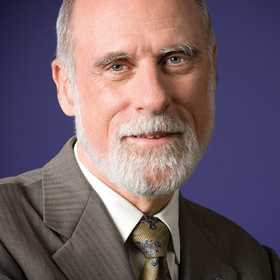 People expect big things from a man known as the father of the internet.

Vinton Gray Cerf – Vint to his friends – doesn’t disappoint. His vitae is riddled with the acronyms and accolades of a true geek, and his name has been on the visitor list at the White House since President Clinton.

You could say he was born for this role. His father was an aerospace executive whose career took the family from Cerf’s birthplace in Connecticut to California by the time Vint was 3 years old. A chip off the old block, Cerf was fascinated with all things mathematical, helping to write statistical analysis software for non-destructive tests of the F-1 engines for the Apollo program at Rocketdyne while still a student at Van Nuys High School.

But the young man’s childhood struggle became the catalyst for an even bigger career. Cerf, who suffered from a hearing impairment, saw computing’s possibility as an alternative communications channel. So with his mathematics degree from Stanford University in hand, he accepted a systems engineer position at IBM and contributed to Quiktran, a FORTRAN-based time-sharing system.

But he soon put corporate America on hold to pursue a master’s and Ph.D. in computer science from UCLA, and ended up in Professor Leonard Kleinrock’s Network Measurement Center group that connected the first two nodes of the ARPANet.

It would have been impossible to stop destiny at that point. He teamed up with Bob Kahn, who was working on ARPANet’s architecture, and the partners designed the TCP/IP protocols and the architecture of the internet. Cerf and Kahn jointly pursued digital libraries, knowledge robots and gigabit speed networks. In a solo role, Cerf birthed MCI Mail, the first commercial email service to connect to the internet.

Since 2005, Cerf’s official title has been vice president and chief internet evangelist at Google where he’s become a popular guru with predictions on how technology will affect future society. To walk the talk, Cerf is working with NASA on the design and deployment of a deep space communications network modeled on the internet.

We did promise lots of wonderful geeky details (these accolades just scratch the surface), but Cerf certainly is not a stereotypical nerd. Dressed in his signature fashionable three-piece suit, he’s also found himself comfortably navigating Hollywood, serving as a technical adviser and even making a special guest appearance on Gene Roddenberry’s “Earth: Final Conflict” series.

During his leisure time, he appreciates a fine wine, loves gourmet cooking and – because you can take the geek out of Silicon Valley, but you can’t always take Silicon Valley out of the geek – enjoys reading science fiction.
We sat down with Cerf to get his take on a handful of current edtech topics.

What’s something you thought you knew that you found out you didn’t?

I thought I understood Newton’s Third Law (equal and opposite reactions), but then I learned about a strange phenomenon that a microwave emitter in a closed, asymmetric container produces a small but measurable force in the direction of the narrow end of the container.

There does not appear to be a good explanation for this, yet. It makes me think of the Casimir effect in which two metal plates, close enough together, will experience a force driving them even closer together owing to quantum fluctuations that are excluded from between the two plates owing to the narrowness of the gap.

Was there a teacher or mentor who influenced the course of your education or your career?

Yes, a fifth grade math teacher, Mr. Tomazewski, gave me a seventh grade algebra book one summer, and I worked through all the problems and fell in love with mathematics.

You’re known for your predictions on how technology will affect the future. How do you think the internet will change in the next 10 years and how should the education community be preparing for those changes?

In 2017, the internet reaches about 3.5 billion people, a great many of whom access it via smartphones. In 10 years, that number will likely approach 6 to 7 billion. There will be much higher speeds available by radio (a billion bits per second is not unthinkable). There will, of course, be 10 years’ more information on the internet. The quality of the information will vary as it does in most other media.

Students will need to be taught critical-thinking skills to distinguish good information from bad information. The educational system will have to shift from measuring what students know to what they can do.

For too long, our assessment of students and the success of the education system hinged on memorizing information and applying it; we should be evaluating how well students can find and apply information, assessing what they can do.

Students – all of us, actually – have access to a vast amount of information on the internet, How can we better teach students to vet and verify information, and is there a way technology can help with that task without restricting access to information?

That’s the question, isn’t it? The skill is called critical thinking and this requires students and citizens alike to ask about the origin of received information, its corroborating indicators, its credibility in the face of logic. Nothing should be taken at face value – not even things that appear to be conventional wisdom (e.g. neutrinos move at the speed of light and have no mass …WRONG!).

As someone who has experienced hearing loss, what are your thoughts on how assistive tech can help students with disabilities?

Hearing aids have been hugely beneficial as has written communication (email, texting, captions on video). My wife has cochlear implants that enable her to hear after 50 years of total deafness.  I’m convinced that we can do a great deal more to help students with physical or cognitive disabilities through the application of suitable technology.

One of the many advantages the internet has brought to education is the ease with which students of all ages can view and read millions of digitized historical records and artifacts. But as technology quickly advances, much of the software and hardware used to preserve and share these files may quickly become obsolete. How can we ensure these tools don’t go the way of the eight-track tape? Does internet-accessible cloud storage solve this issue or is there more we need to do?

There is more to do – long-term preservation of digital information will require a coordinated effort to preserve old software and the ability to emulate old hardware on which older operating systems and applications can be run.

We will need business models to sustain long-term storage of digital information. We may need exceptions to copyright and patent constraints to allow users to run old software (e.g. in the cloud).

We will need a regime that supports copying of old formats into new ones that can be correctly interpreted by more modern software. There is a lot to be done. The cloud-based systems can be very helpful but are not the total solution.

You’ve long supported innovative projects that attempt to find solutions to global problems like the digital divide, the gender gap and the changing nature of jobs. Can you share some of the problems currently being addressed with technology? How can students get involved in solving today’s tough problems?

The first thing the students need to understand is the nature of the problem before they can consider solutions. For one thing, students will be living longer lives and their careers will be extended to perhaps 60 to 80 years! They will need to learn new skills and capabilities throughout their long careers.

Technology can help with online training and assistance to discover new knowledge, but students and citizens alike must be prepared to learn new things in the course of their long lives and careers. Crowdsourcing may become the avenue through which innovative solutions to problems arise.

In the 1970s when you were inventing the fundamental architecture of the internet,did you consider the role technology could play in education? What is your vision for tech’s role in education in the future?

I hoped that the internet could be one of several channels through which students could learn, could access myriad content, could discover new interests and like-minded people with interests in common with their own.

I hoped that students would learn to find and apply information from the internet. The YouTube videos on “how to do X” for various values of X are prime examples.

More and more schools are teaching coding with the mantra being that teaching kidshow to code will land them good jobs and provide a new path to the middle class.Others say this premise is flawed because the world doesn’t need that many moreprogrammers, and that teaching all kids to code will flood the market, driving wages down. What’s your take on this debate?

I think the purpose for learning to write software is NOT to become a programmer but to learn to THINK like a programmer. How to parse problems into manageable pieces. How to solve each piece (with a program) and then integrate them back into a whole solution.

Analytic thinking is the key talent we want students to learn.

What’s the next big technology that will transform education?

If you could change the way schools are structured in one fundamental way, what would it be?

Stop measuring what students can memorize and focus on teaching them how to learn and how to do.