WHAT WORKS: Kids saving the world from digital villainy 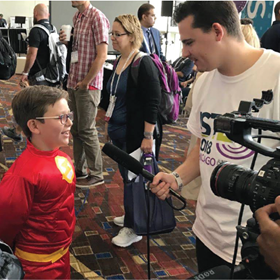 Mexican superhero Chapulin Colorado may not have the gravitas of his fellow caped crusaders, but he takes copyright law very seriously.

An expert at blending into the shadows, Batman has a thing or two to say about online privacy.

Armed with X-ray vision, Superman uses his power of discernment to teach kids how to spot fake news.

Villains may not quake in their boots when the Little League of Justice arrives on the scene, but potential cyberbullies will likely think twice about harassing someone online. This group of superpowered third graders at Northridge School Mexico in Mexico City spent the past year not only learning about digital citizenship, but also teaching it — to adults as well as their peers.

During their unit on digital citizenship, some of his students became concerned about the dangers lurking in the digital world — not for themselves, but for their less tech-savvy parents, whom they feared would fall prey to online scams. Equipped with their newfound knowledge, they decided it was up to them to protect the adults in their lives from cybervillains.

So they formed the Little League of Justice and started sharing what they learned with their parents and peers through speeches, classroom demonstrations and video talks.

THEY FLEX THEIR EMPATHY MUSCLES. When students view themselves as protectors and champions, they expand their capacity for empathy — and that makes them more likely to speak out on behalf of others. “If they see cyberbullying, they won’t ignore it,” Aparicio says.“I’m sure of it. They will stand up speak for others.”

THEY KNOW HOW TO TALK TO THEIR PEERS. When the Little League of Justice visited the first and second grade classrooms in their school, Aparicio was surprised by how engaged the young audience members were. “They were asking questions. They wanted to behave like their peers,” he says. “They think, ‘Maybe I can also be a superhero.’ ” While the students learned a lot about digital citizenship, they weren’t the only ones. Aparicio learned from them, too.

“In the past, I thought my duty was to wear a cape and become a hero by helping others,” he says. “But after this experience, I would say my role is to make other people superheroes — not just other teachers, but students as well.”

It’s a truth that’s universally acknowledged. By the time parents adopt a social media platform, their kids will have already moved on to something else.

That’s a common source of frustration for today’s parents whose impulse is to stand in front of their kids and protect them from whatever comes their way, says Laura Day, lead counselor at Stamford American International School in Singapore. When it comes to social media, they feel like they’re constantly one step behind.

“I think there’s a sense of fear about it because it’s unknown,” she says. “They’ve figured out Facebook and WhatsApp, but that’s not what kids are using anymore. They hear stories about bullying and sexual predators online, and they don’t know what’s going to happen.”

This mounting fear inspired the school to host an informative session on social media. The goal was to give parents some visibility into what their kids do online — and they decided the best way to do that was to ask the teenagers who use it most.

Excited to share their knowledge about one of their favorite activities, middle and high school students teamed up to educate their parents on social media by demonstrating their favorite apps, doling out advice and talking candidly about their online experiences in three parent sessions throughout the school year.

“They were standing up in front of a whole bunch of adults in the room and talking openly and honestly about things,” says Craig Kemp, head of educational technology. “They were even challenging parents. It was empowering for them to be the leaders. The parents just wanted to learn, so for them it was all about sitting back and listening.”

KIDS ARE THE CONTENT EXPERTS. Today’s teenagers are more qualified than anyone to talk about when, how, why and on what platforms they connect online. Asking students to lead the session not only made them feel valued for their knowledge, but it gave parents insight into how their kids think. Some of the students explained to how texting with their friends isn’t all that different from the various ways adults stay connected to each other.

THEY’RE EAGER TO SHARE. Parents hungry to understand how their less-than-communicative teens think might be surprised to discover how much students are willing to share when there’s no risk of backlash. The key to getting them to open up is to provide a space where they can speak freely. During the social media session, parents were only allowed to listen to their own child’s presentation if the student gave permission. This encouraged students to answer questions honestly and discuss their own online mistakes. “Empower kids to talk openly,” Kemp advises.

DIALOGUE DISRUPTS THE FEAR CYCLE. When parents hear only about the negative effects of social media, they’re more apt to lock down technology use in the home. Learning about its positive aspects helped them accept that social media isn’t something they can banish from their children’s lives. “This is what they do. This is where it’s all happening for them, and that’s not going to change,” Day says.

Demystifying social media has also helped ease parents’ fears about how their children will fare online, Kemp says.
“For parents, one of the big takeaways was that our kids are pretty amazing, and maybe we don’t need to worry so much.”