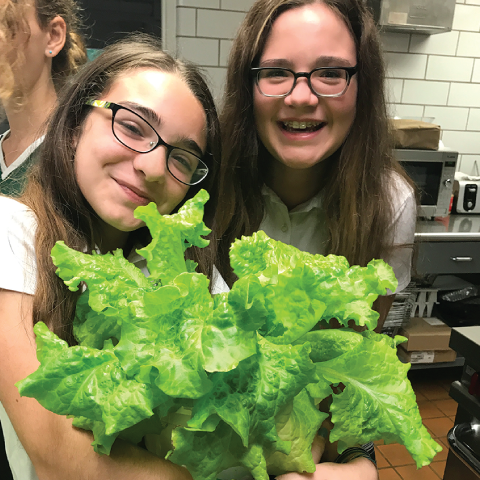 Can a group of eighth graders end world hunger using Arduino and a 3D printer?

Maybe not. But they can make one heck of a salad – and in the process discover how coding can help them solve real-world problems.

During the 10-week project, spread out over two years, students design and build their own planters, then test them out by growing lettuce in the
classroom.

“We were trying to find something more authentic for kids to do that relates to real-world global issues that, potentially, their generation will have to solve,” says Smith, a classroom teacher who now serves as the school’s director of technology.

With climate change threatening global food supplies and more than 800 million people in need of emergency food assistance in 2017 alone, a growing number of countries are turning to technology for a sustainable answer to the world’s hunger crisis. Inspired by the success of farmers in the Netherlands, who are using agritech to drastically increase their crop yields while reducing resource consumption, Smith devised what he dubbed the “nerd farmer” project to get students thinking about solutions.

Scaffolded learning helps build coding skills.
Before students begin designing their hydroponic planters, they’ve already developed many of the skills they’ll need to draw upon. Starting in seventh grade, they leave behind drag-and-drop coding and venture into JavaScript. They practice troubleshooting, experiment with programmable electronics and design an automated fish feeder. In eighth grade, they start learning about how hydroponic systems work by testing water level sensors, building humidity sensors and creating basic pump systems. Finally, they’re asked to put all of these individual labs together to create their smart planters.

Students fail — a lot.
Even though they’ve already learned how to build the planter’s various components, making all the parts work together is an entirely new challenge. Smith loves it when they don’t get it right away. “I want them to have a bit of a struggle. It builds grit,” he says. “They have to pull together and figure it out, and they have to support one another, just like in a work environment.”

They start thinking like designers.
Before building their hydroponics system, students are charged with designing and 3D printing a regular soil planter. Some get so inspired by the project they start bringing other designs to class. “It’s neat when they go home and design – not for a grade, but because they’re passionate about it – and they want to come in and build and see their work brought to life.”

So far, Smith is encouraged by the feedback he’s received. Other schools are showing interest in the project, and even some eighth graders – a notoriously hard sell at times – have given it their thumbs-up.

“At the end of the class, we make one big salad and eat it.

Taking the pain out of finding new edtech tools

As free apps and edtech tools continue to proliferate, vetting and implementing them has become a thorny issue for education leaders.
Is the tool compatible with the district’s IT infrastructure? Will it put students’ privacy at risk? Does it make a difference in learning outcomes, or is it just another piece of gratuitous technology? These questions often get overlooked as teachers feel their way through an increasingly complex edtech
landscape.

Tech-savvy educators research edtech options using tools like ISTE’s Edtech Advisor, powered by LearnPlatform. But some educators still aren’t sure where to begin.

When leaders at Sun Prairie Area School District in Wisconsin needed a way to specifically address student privacy concerns without putting the brakes on technology use, they devised a 48-hour vetting process that steers teachers toward the safest and most effective options while allowing them the freedom to choose tools that work for them.

“There’s a fine line between really wanting
people to dive into edtech and being purposeful and thoughtful about the way they dive in,” says Keleen Kaye, the district’s digital learning
manager.
Teachers seeking new technology solutions can start by consulting her database of more than 100 pre-vetted apps, which are evaluated on how well they meet student privacy standards and district learning goals. They can then choose an app from the approved list and start using it right away, or they can propose an app they want to use and Kaye will research it for them – typically within 48 hours. As each new app is vetted, it gets added to the
database along with tailored suggestions for how it can be used.

It’s easy, and reliable.
With a growing body of free tools available online, teachers can currently easily bypass official procurement procedures, making it all but impossible to safeguard student data. Rather than requiring teachers to use the vetting process, Kaye lures them in by taking the pain out of finding new tools by providing a reliable, helpful resource, that holds both sides accountable.

“If we want people to use technology and use it well, we need to make sure we have buy-in,” she says. “There’s no reason for teachers to have to go through my process when everything is at their fingertips.”

Teachers make more strategic choices.
One of the most common edtech pitfalls is using technology for its own sake, rather than for what it can help students achieve. “When people come to me asking for a list of apps they can use, I ask them what they’re trying to do with their kids,” she says. “It’s not about the thing, it’s about what you’re trying to do with the thing.”

They can focus on what matters.
When teachers no longer have to do the hard work of vetting, they have more time to focus on improving student outcomes. They also spend less time spinning their wheels with shiny new apps that don’t really move the needle. It’s especially helpful for educators who are just getting their feet wet with technology, Kaye says.

As the database of apps continues to grow, her next step is to start aligning the tools with the ISTE Standards. “We’re building the plane while flying it,” she says. “There are so many teachers out there using different things, and we want to get the word out and get everybody to be a lot more thoughtful. We’re trying to get ahead of curve here.”