4 innovative lesson ideas to bring magic to your makerspace [VIDEO] 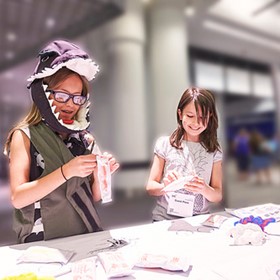 One indicator of a creative mind is the ability to make connections between seemingly unrelated concepts. Empowering students to combine disparate ideas and create new things lies at the heart of Cathy Hunt’s approach to teaching art at St. Hilda’s School for girls on Australia’s Gold Coast.

“What you won’t see here are barriers,” said Hunt during her Ignite session at the ISTE 2016 Conference & Expo. “They’re seeing their world differently … and that’s a beautiful thing.”

Like many acts of making, Hunt’s digital/analog mashups engage students and inspire creativity while addressing the 2016 ISTE Standards for Students such as the Innovative Designer and Creative Communicator standards. They’re also learning valuable digital skills that align with the Empowered Learner, Digital Citizen and Knowledge Constructor standards.

“These are kids who really used to believe that their ability to be creative was limited by their ability to draw. Not so,” said Hunt. “Bringing our work to life brings magic to our making.”

Here are some examples of how Hunt brings magic to making by combining edtech and analog methods:

1. Students scan pieces of a large mural with their phones or tablets and digitally enhance the patterns they capture. Then, they send their designs to a 3D printer, which transforms them into delicate tiles that became part of a collaborative community art installation.

2. First-graders learn about animals while building digital skills. “They’re using augmented reality to build informative imagery,” Hunt explained. “They’re learning about animal classification, and control over the camera is happening at the same time. These skills can be learned simultaneously as we collect close-ups of creatures and knit cross-curricular opportunities together.”

3. Kids generate gorgeous symmetrical mandalas on their iPads and then print them on paper, paint them with watercolors and fold them into 3D fractals. “These patterns became starting points for tessellations,” said Hunt when describing the project. “Girls here are exploring mathematical concepts with symmetry. … These fractals they produced spin in the air or pop out of our fractal garden.”

4. For older students, Hunt taps into their interest in taking selfies to teach digital citizenship. “Meeting the students where they are at is so important,” she said. “[This project] ends with a very critical analysis of those camera rolls, and we all know how important that is as we look for opportunities to talk about digital citizenship and visual language to create and construct meaning.”

“With no separation between subjects, hands-on practices and processes — digital and everything else — we can take students’ creative toolbox way beyond the screen,” Hunt said. “So let’s make learning messy!”

Watch Hunt’s Ignite session from ISTE 2016 to see many more art lessons that expand the boundaries of students’ creativity.

As a classroom teacher, Jullia Suhyoung Lim encountered many children like her childhood friend Eddie, a passionate, playful child. Adults called him “different”; Lim later realized he was probably on the autism spectrum.

Through her classroom experience, Lim discovered that living…

It’s a familiar hunt for educators – finding that one app that’s the magic bullet for teaching a skill or providing practice. It’s a search that’s futile, and one that should be replaced with a new way of thinking.

Imagine searching instead for tools that allow learners to…

2017 has been quite a year. Virtual reality, global citizenship, a solar eclipse and the release of the ISTE Standards for…