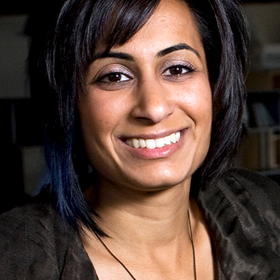 ISTE reached out to inspiring people from a range of fields and asked them to share their insights in mini-keynotes at ISTE 2014. This EdTekTalk is one in a series of five videos that showcases futurists, designers and entrepreneurs.

Shaherose Charania was in college in 2005, when web 2.0 was still its infancy. Although she didn't quite know what web 2.0 was at the time, she felt the buzz and knew it was something she wanted to be a part of.

" "I was excited by the idea of technology and how it could change people's lives," " Charania says.

She wanted to know who was behind some of the up-and-coming Silicon Valley startups, so she looked them up. Staring back at her were the faces of men.

" "It really didn't connect," " she recalls. " "The reality is it was a huge disconnect for me and other people." "

It was discouraging and didn't seem fair. And in hindsight, it wasn't a very good business model. After all, women control household spending, influence a huge chunk of electronic purchases, have a larger presence on social media and even participate in social gaming far more than men. Who better to be involved in creating the technology of the future?

Hoping to chart a course where tech-savvy women could get a foot in the door, Charania started Women 2.0 in 2006 to help women in technology become leaders, founders and investors. Women 2.0 creates content, community and events for aspiring and current innovators in technology.

Today, many of the entrepreneurs involved in Women 2.0 have gone on to found successful startups, and Charania knows that's the ticket to making a difference.

" "We need role models to help us think about what we could be doing," " she says.