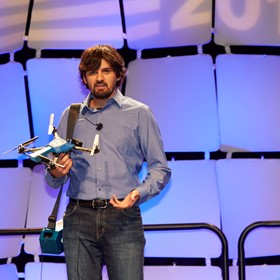 Contrary to popular belief, not all engineers were born with an affinity for math. Some have to find the right inspiration.

Take Sergei Lupashin. The Russian aerial robotics researcher, inventor, businessman and TED Fellow was not impressed with the mathematics instruction he received in his younger years.  “I remember learning about geometry in high school and [thinking], ‘What the heck is this?’” Lupashin said during his EdTekTalk at ISTE 2015.

Fortunately, the dry lectures he sat through in high school bore little resemblance to his experiences as an undergrad at Cornell University, where professors challenged him and his fellow engineering students to create soccer-playing robots for the RoboCup. “If you take just a small part of this challenge — like the kickoff — it’s all about trig and geometry,” he explained. “When you’re programming the [artificial intelligence] for the goalie for this game and trying to figure out how to rotate it around so you minimize the probability that the ball will go into your goal, you learn trig very quickly. … It’s not just that you’ll become a trig master or a goalie AI master. You really have to learn about uncertainty, about non-ideal systems, things failing.”

Lupashin was so inspired by his participation in student team challenges — including the DARPA Grand Challenge in 2005, which spawned the technology behind Google’s self-driving car — that he parlayed many of the ideas and skills they developed into a career as a robotics engineer.

Competitions, he realized, are the key to engaging students in STEM while solving some of the world’s biggest problems.

“Everything in my life that has allowed engineering to actually work for me has [come out of] competitions,” he said. He chalks this effect up to three qualities that most competitions possess: They are challenging, novel and fun. “Fun in my case is something tangible — something you can actually see and feel and see how it changes,” he said.

Lupashin now runs a company in Zurich, Switzerland, that creates and sells the Fotokite, a user-friendly quadracopter designed to make aerial photography accessible to journalists, biologists, emergency responders and other professionals.

The idea for this “drone for the masses” also came out of a student team competition that he credits with teaching him the value of intrinsic motivation as well as the role that failures play in learning. “As students, we’re learning, so we’re going to make a lot of mistakes, we’re going to break a lot of stuff. And there will be setbacks,” he said.

“You can’t push people,” he added. “That only works to an extent. They really have to pull themselves.”

Check out Lupashin’s entire EdTekTalk to see a demonstration of his Fotokite in action and learn more about how challenge-based learning can develop STEM skills.