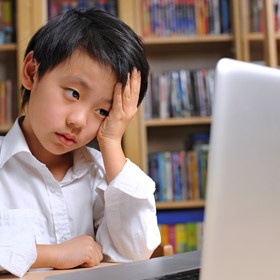 Nicholas Provenzano has learned a lesson that he's determined to pass along to students: Failure is often the first step toward extraordinary success.

“I want students to do one, big gigantic failure at one point or another,” this English teacher and technology curriculum specialist acknowledges from his classroom in Grosse Pointe Public Schools in Michigan.

His bio certainly doesn’t point to a man who found success by embracing failure. Provenzano was recognized as ISTE’s Outstanding Teacher in 2013, he’s been in the spotlight at CNN.com and the New York Times, and he’s the author of Classroom in the Cloud: Innovative Ideas for Higher Level Learning, and The Car Keys and Other Stories.

But his secret to excellence doesn’t lie in being consistently competent. Instead his strength was forged in the wrong turns, mistakes and oversights along the way. He’s struggled with everything from building a koi pond in his backyard to learning to code despite dyslexia, and he wants to pass on this sense of victory to his students.

In this EdTekHub InnerView, Provenzano sat down with CEO Brian Lewis to chat about his freedom to fail philosophy and how it’s changing students’ attitudes toward learning.

Need more inspiration? Check out these 4 tips for failing successfully.