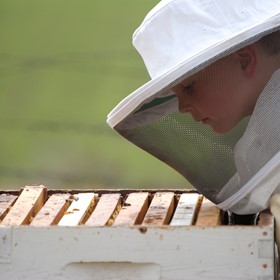 Teenager Amy O’Toole was only 7 when her teacher asked her class if they wanted to train bees to play.

“Our imagination went into overdrive,” O’Toole recalled. The boys wanted to teach the insects how to play football, while the girls argued for a dance routine.

That was a pivotal moment, O’Toole told the audience at her ISTE 2015 EdTekTalk. It was the moment when science inspired her.

In the end, the students at her Devon, U.K., school came up with a game that the bees successfully played. The hives were kept in the back of a church, and the students wrote their paper in a pub, starting it with “once upon a time” and including diagrams drawn in crayon.

They called it play.

But the instructor recognized that these miniature scientists had pulled off what had never been done before, and he pushed to get the results professionally recognized — an adult’s measuring stick of success.

Watch the video of O’Toole’s EdTekTalk to learn more about the landmark Blackawton Bees project and its results, then read on to learn how O'Toole became on of the youngest people ever to publish a peer-reviewed science paper.

O'Toole knew the paper was big because the document was downloaded 30,000 times on its first day, was the editor’s choice in Science Magazine and is the second most downloaded paper in Biology Letters. She was interviewed on the radio, television, made the front page of the newspaper and appeared in a TED Talk that has been viewed more than 1 million times.

She now sees science at work in ordinary ways and admits to a passion that will fuel her life choices. “We have so much space, so many resources in our world that we can create opportunity and excitement anywhere,” she told the ISTE audience.

But the real lesson is what the educators were willing to do behind the scenes. It took two years before “Blackawton Bees” was published on December 23, 2010, in Biology Letters. The paper published as the students wrote it — no one cleaned up the intro or polished the kid-speak phrases. The report thanks the George Inn for providing free Cokes to the kids.

And the entire project required adults to challenge the logical notion that children can’t do real science. As a result, O’Toole walked away knowing that “it’s just as valuable to find what doesn’t work” and that success boils down to a catchy mantra: “Find it, test it, push it.”