Make music videos with your students for deeper learning 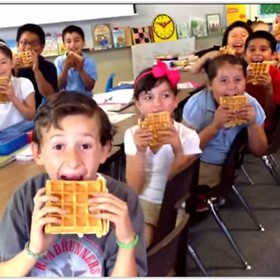 " "Never eat soggy waffles!" " I thought this mnemonic device for remembering the points on a compass would be enough for my second graders to learn cardinal directions. As it turns out, all it did was enable my students to mindlessly fill in north, east, south and west on the test I had given them. They didn't have a true understanding of which direction was which, and I needed to change that. I accomplished this by writing a music video with them.

That's right, we created a music video to learn about cardinal directions. We started off by writing lyrics. Students worked individually, in pairs and as a whole class. I was surprised by how engaged every student was during the writing process. Students who typically despised writing were some of my most fruitful lyricists. It was a good reminder to me to teach writing in a variety of ways, ideally tied to a larger project.

Once we had lyrics with a beat, it was time to add music. I used GarageBand on my laptop to teach students how to write original songs because it has thousands of prerecorded loops that we can mix and match to build a song.

One helpful feature of GarageBand 10 is the Drummer option (OS X Mavericks is required), which magically matches the complexity and intensity of tracks in your timeline. It dynamically adjusts when you add more instruments. We typically find a loop we like and write a melody to match it. It's like having a virtual drummer who expertly follows along with whatever we record, so we don't have to worry about finding the right drum loop for each section of our song.

My original plan was to end this project once we'd finished the song, but more than one student said, " "So we are going to make a music video, right?" " And so we did.

As it turned out, creating the video was when the true learning happened. It allowed me to teach visual literacy, storytelling and video composition. Not only did students map out locations, using cardinal directions to explain chase scenes, but they wrote with a level of passion I had never seen before. For each lyric, students wrote an entire paragraph explaining what that might look like in a video. They also storyboarded each lyric, describing what kind of scene would tell their story using the song as a backdrop.

When it came time to actually shoot the video, each student had a job — wardrobe, actor, director of photography, lighting, etc. It was tricky to engage an entire class in the filming of a video, but guaranteeing each student a role was worth the effort.

We edited the video as an entire class by voting on editing options while I AirPlayed my laptop onto an Apple TV. Finally, we uploaded the video to YouTube so we could teach other second graders about cardinal directions.

The next time your students are struggling with a concept, consider writing a song about it. I've written songs with students about the water cycle, U.S. presidents, Pangaea and rocks. It's a powerful way for students to demonstrate proficiency and for teachers to integrate the arts into the classroom.

The great thing about writing lyrics is that even nonmusical teachers can write sentences that rhyme. And with the help of GarageBand, you don't have to be a music teacher — or a musician — to write music with students.

If you get lost, follow a map
You'll get back on track in a snap
Maps will help you go somewhere new
Without a map, you will be doomed

A compass rose, it shows you north
East and west, to go back and forth
A map has a legend and key,
Symbols, titles for you to see

What do educators love to read about? Judging from the most popular posts that appeared on the ISTE Blog in 2018, they are looking for ideas and strategies for…

I often see discussions in ISTE Connect, home of our online communities, asking for advice about a tool that does this or software that does that. “I need a typing app that works with fourth graders on an iPad.” “Our school is looking for a new LMS.” “I’ve tried this assessment software,…