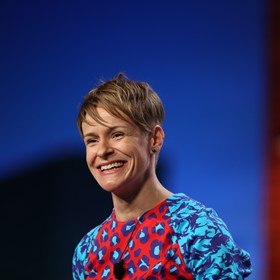 It’s quite possible that Canadian third grade teacher Michelle Cordy has cornered the market on enthusiasm.

And that’s a great catalyst for a woman who created her own job title called "applied researcher."  That's the term she came up with to describe how she experiments with education theory by applying it to the eager young faces who show up in her room in every day.

Cordy, who teaches in Ontario’s Thames Valley District, has partnered on 10 projects that attempt to bridge the gap between theory and practice, starting with visual special reasoning projects that took advantage of her mathematics master’s degree. She’s also studied how math can bring arts and tech together for gifted students — and brought it all back to the classroom to help her students.

“I see tech as people in disguise,” she says. “It’s the obvious conduit for connection.”

Her closing keynote at ISTE 2016 was the high-energy presentation you’d expect from someone who has taught grades two, three, four, seven and eight during her 15-year career, earned distinctions as an Apple Distinguished Educator and Google Certified Teacher and founded the Hack the Classroom blog.

But perhaps her biggest story, as she shares in an EdTekHub InnerView, is the driving force behind her competitiveness and how she relies on her ISTE membership.