Video: LeVar Burton meets today's learners where they are 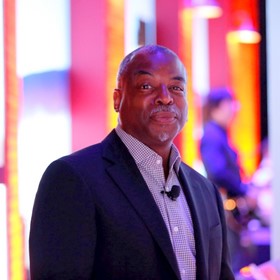 Most teachers could introduce LeVar Burton without cue cards. For a quarter century “Reading Rainbow,” the literacy television program he produced and hosted, inspired kids to find the magic sandwiched between the pages of a book.

The public’s response translated to more than 200 broadcast awards for the series, including a Peabody Award and 26 Emmy Awards, 11 of which were in the "Outstanding Children's Series" category. Burton took home 12 individual producer Emmy Awards himself.

Thanks to the show's popularity, it’s no wonder Burton hears “Take a look! It’s in a book!” everywhere he goes, even when the appearance is focused on his other famous personas: Kunta Kinte in “Roots” or Geordi La Forge from “Star Trek: The Next Generation.”

Childhood experiences derived from reading often transcend adult struggles, as Levardis Robert Martyn Burton can affirm from his own upbringing. And that’s why, in part, he has extended Reading Rainbow to a new generation of students in the classroom via an app called Skybrary.

But his connection to education goes far deeper than a career or another famous role in front of the cameras, as he shares in this EdTekHub InnerView.