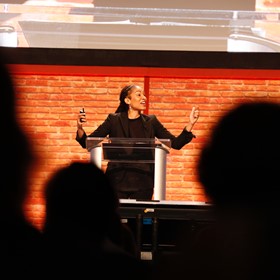 Ruha Benjamin sees schools as laboratories of democratic participation, where society incubates a better world in the hearts and minds of its students.

That’s why elementary schools are in a better position to teach equality than personnel departments or training coaches, says Benjamin, a Princeton professor who specializes in the interdisciplinary study of science, medicine, biotechnology, and race, ethnicity and gender.
“Teachers, if actually unified and empowered, can change the direction of history,” she says.

In her powerful ISTE 2016 keynote address, Benjamin said the first step to creating a society where people care and sacrifice for one another is to examine whose version of the good life is setting the standards — and whose voices are being ignored. Real power, she said, lies with who gets to dream today, and should not bypass the lower-income and minority students in our classrooms.

Our mission is not to empower our students to succeed in the world as it is, but rather to design alternatives to the current system. Educators need to embrace a rigorous imagination or they’re only creating a shiny new version of the same old thing, she said.

Watch Ruha’s full keynote address below to find out why she brought down the house at ISTE 2016.