What should be in your makerspace toolbox? 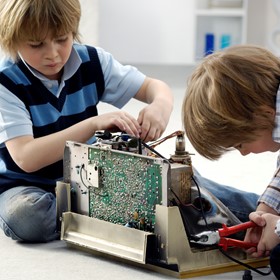 When Vinnie Vrotny was growing up, his father gave him many “gifts,” as he called them — hammers, screwdrivers, wrenches and toolboxes full of the nuts and bolts to create and fix his own inventions.

But the most valuable gift his father ever gave him was something that he still uses today: An engineering mindset, or the ability to take a look at a problem, come up with a solution and build and crack that solution.

From his mother, Vrotny got a love a reading, which led him to wander through his public library two decades ago and pick up a book called Inventing Kindergarten. That book introduced him to Friedrich Froebel, the man who developed the first kindergarten philosophy, a belief that children should discover the world through free play and association.

Vrotny, who is director of technology at the Kinkaid School in Houston, Texas, felt an immediate kinship with Froebel, who died more than a century before Vrotny was born.

Froebel believed that children should be free to dance and sing and play and tinker. To encourage exploration, he developed 20 “gifts” for children, including yarn balls, building blocks, tablets, rings, sticks and wooden cubes.

In this Ignite talk from ISTE 2015, Vrotny suggests some digital age gifts to add to Froebel’s list. Watch Vrotny’s talk to find out what’s in his makerspace tool box.

Want to be inspired by forward-thinking educators like Vinnie Vrotny? Register for ISTE 2016 today to hear live presentations from some of the brightest minds in education.