Who says techie kids never get outside? 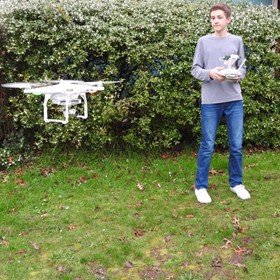 Miles Rasmussen has scrambled up wicked, winding trails of crumbling scree to reach peaks offering spectacular views of the Willamette Valley. He’s waded through streams, rivers and the frigid Pacific Ocean — from California to Canada — in search of fish and other water creatures. And he’s trudged through deep snow to camp under the stars in Oregon’s Cascade Range.

He’s not the type of teen, perhaps, who you’d expect to be passionate about technology. But to Miles, there’s a natural connection between his love of the outdoors and his fondness for tech.

“I’ve always been a sucker for gadgets,” he says. “I guess I’ve found a way to connect the two.”

He saved up and bought his first point-and-push camera at age 6 or 7, started shooting and editing videos around age 11 and now, at age 15, he’s using a GoPro camera with his latest “gadget” — a Phantom 3 drone with an HD camera — to capture video of the scenery he encounters on his adventures.

“I still really enjoy being in the outdoors even without my GoPro and drone,” he says. “But they allow me to share these experiences, and the drone allows me to get views I’ve never seen before.”

They’ve also given him the opportunity to learn, troubleshoot and create with technology while pursuing a passion — all hallmarks of the ISTE Standards for Students.

Last December, for example, he strapped his brand new drone to a sled and dragged it up an icy incline to document a snow camping trip with his dad and brother.

His parents, not surprisingly, were less than enthusiastic about Miles bringing the $800 drone, which he bought with his own savings, out on a snow camping trip. But his persistence won out.

The effort was not without glitches. He discovered that the drone battery didn’t operate in freezing temperatures, so he had to come up with a solution on the fly. He wrapped the battery in a self-heating hand warmer until the battery functioned properly again.

The reward for all his efforts was breathtaking aerial footage of glistening Odell Lake, miles of snow-laden spruce, a time-lapse sequence of the sun setting behind his tent on a snowy clearing and a gray jay snatching an almond from his hand. He stitched the footage together using iMovie, selected a soundtrack and created a video sure to make urban dwellers yearn to spend more time outdoors.

“I really am going to enjoy having this cool footage 10 years from now,” he says. “It’ll be fun to look back and see what I was doing at this age.”

In fact, he’s already done that. Six months ago he watched a digital travelogue he made a few years back during a trip to the family’s cabin in British Columbia, Canada. Using the cheap digital camera he bought years earlier, he chronicled his trip by recording daily videos talking about what he did each day.

“It had all the details I never would have remembered about the trip,” he says.

In addition to the snow camping video, he compiled another video using GoPro footage from all the hikes and camping trips he took over the course of a year.

Although he prefers shooting nature, Miles also uses his drone for school projects. He’s taking a digital media class at Churchill High School in his hometown of Eugene, Oregon, and the drone came in handy for taking aerial video for a public service announcement his team made about crosswalk safety.

Although his mom, Anne Williams, admits she was slow to warm to the idea of Miles buying a drone, and before that, the GoPro, she is impressed with what he’s created with the devices.

“He’s done all of this completely on his own,” she said, “from figuring out how to work the thing to getting it registered with the FAA to meshing the drone with the GoPro to learning how to edit the footage. He’s extremely motivated to do the very best work he can. ”