Students can explore the solar system's outer limits with NASA 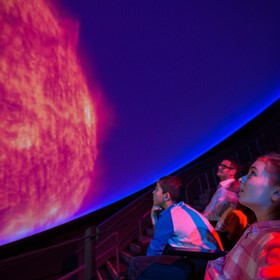 Wanted: Rogue planet believed to be hiding at the edge of the solar system. Cold, faint and hard to spot. Reward for information leading to its discovery includes the chance to contribute to a new field of science.

“It’s a huge opportunity for education,” says Dr. Marc Kuchner, a NASA astrophysicist and lead researcher for the Backyard Worlds: Planet 9 citizen science project. “If you’re studying astronomy or learning about stars, you can actually do astronomy while you’re learning about it.”

Launched just over a year ago, Backyard Worlds invites the public, including teachers and students, to join the search for undiscovered worlds within the outer reaches of our solar system and nearby interstellar space. Science students can participate by signing up on the project’s website and examining photos from NASA's Wide-field Infrared Survey Explorer (WISE) mission for specific anomalies that could be brown dwarfs — or even the mysterious Planet 9 that scientists have been searching for.

“It’s probing our own backyard, astronomically speaking. But it’s a region that we know relatively little about,” he says.

From the debate over whether Pluto is a planet to the question of whether there’s another planet beyond it, the space between Earth and the nearest known stars remains shrouded in mystery. While astronomers have pinpointed neighboring stars, which give off enough light to be easily detectible, they don’t know how many brown dwarfs might be hiding among them — or between us and the closest known star system. Ranging in size between the smallest star and the largest gas giant planet, brown dwarfs are cool and give off little light, which makes them harder to detect.

“There are thousands of brown dwarfs known, but nobody knows quite how cool they can get,” he says. “We’ve just started to appreciate that there can be these very cold, faint brown dwarfs nearby that could in fact be our nearest neighbors in the solar system. They’re cooler and fainter, so we have to stare extra hard to try to spot them.”

The search for Planet 9

A belt of objects orbiting the sun has shown an unusual clustering pattern that may indicate a super-size hidden planet lying between them. Dubbed Planet 9, scientists believe it has the mass of 10 earths and takes 15,000 years to orbit the sun. But they still haven’t found proof of its existence.

They’re hoping citizen scientists can help track it down.

While no one has found Planet 9 yet, more than 40,000 volunteers around the world have already helped pinpoint several previously unknown brown dwarfs. In fact, one of the project’s first discoveries belongs to a science teacher in Tasmania — a brown dwarf so small astronomers couldn’t spot it without the exact coordinates.

“Lo and behold, there was an itty, bitty, tiny dot you could hardly distinguish from the noise,” Kuchner says. “We were able to get a quick follow-up spectrum from the infrared telescope facility, and it turned out to be a T-dwarf, one of the cooler kinds of brown dwarfs.”

Since then, citizen scientists have compiled a list of 430 candidates for brown dwarfs. After investigating a mere dozen of them, NASA was able to add 10 new brown dwarfs and two sub-dwarfs to its stellar map. All told, Kuchner expects to discover roughly 1,000 new brown dwarfs by the project’s end.

“This could make a real impact on the field,” he says. “If we can collect enough of these rogue planets in different environments and compare them to known planets, it gives us a better shot at figuring out how different objects are formed, and why some form around stars and some don’t. We’d like to know what our nearest neighbor is, what the coldest brown dwarf is and what the closest object to the sun is.”

How to join the hunt

NASA scientists need help combing through millions of infrared images captured over a five-year span. They’ve compiled those images into flipbooks, or brief animations that show how patches of the sky changed during that time.

By going online and examining the flipbooks for moving objects, students can help astronomers narrow their search. Just mark any objects of interest using the website’s built-in tool, and NASA’s science team will follow up by observing the flagged objects more closely. Participants will get to share credit in any scientific publications that result from their discoveries.

The project’s website contains all of the information teachers need to get started, including a tutorial on what to look for. Specifically, astronomers want to know about any objects that appear to move in a straight line.

It’s a simple task, but an important one. It also meets the ISTE Standards for Students, giving students around the globe a platform for collaborating with real-world scientists while using technology to empower them as learners and citizens. Students who participate in the Backyard Worlds projects are making a genuine contribution to the world’s body of knowledge about our nearest interstellar neighbors.

“It’s absolutely amazing when you find something,” Kuchner says. “The only thing more amazing is getting to tell people, ‘Hey we took a spectrum of this moving dot you found, and guess what? It’s really a brown dwarf.’ ”

NASA has learned a lot about planets from the Kepler Space Telescope. Read about nine discoveries aided by Kepler's journey.