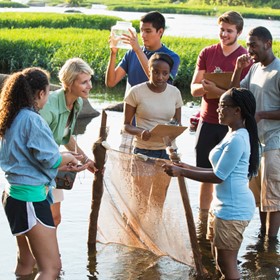 From star observations to weather patterns to species populations, scientists across the globe are generating data at an astonishing rate.

In the next 24 hours, NASA will collect more than 12 terabytes of data from thousands of sensors and systems in space and across the globe — and future missions could double that rate. Climate change data alone are expected to grow to nearly 350 petabytes by 2030.

Imagine what discoveries lurk within that ocean of data. Another planet in our solar system, perhaps. Or a solution to one of humanity’s most pressing problems.

Now imagine if students got to help make those discoveries.

With SciStarter, a searchable database of more than 1,500 vetted citizen science projects, they can. SciStarter helps teachers find real-world science projects they can use in the classroom to engage students in authentic learning experiences.

“With citizen science, you can collaborate with NASA and with marine biologists,” says Jill Nugent, social media manager for SciStarter and associate dean of STEM science at Southern New Hampshire University. “It turns you from a sideline viewer of science into real-world doer and contributor to science.”

What is citizen science?

With so much information to sift through, it’s no wonder less than 1 percent of the world’s data ever gets analyzed. That’s one reason NASA and other organizations are inviting the public to become citizen scientists by collecting and analyzing data for hundreds of real-world science projects.

“They’re asking for students and the public to help them ground-troop their data,” Nugent says. “There’s a lot of data from satellites flying over us in space collecting soil moisture and drought data. It’s so helpful to have people on the ground with their mobile devices reporting and collecting data, or helping to refine data and get insights.”

Citizen science projects are designed to be simple and intuitive, so anyone can participate. From snapping photos of bees to classifying images of cancer cells to counting craters on the surface of Mars, science enthusiasts across the globe can collaborate with scientists on genuine research projects.

Getting started with SciStarter

Citizen science is nothing new, but technology has made easier than ever for the public — and especially teachers and students — to participate in it.

“Technology really opens up opportunities for citizen science, literally from the local level all the way to global,” Nugent says. “Students are carrying around in their pockets a data collector and analyzer.”

Scistarter, which Nugent describes as “Match.com for citizen science,” is a powerful tool for finding citizen science projects. Entering a location and a topic of interest brings up a list of available projects, each of which includes a description, recommended age group and links to any classroom or training materials available so teachers can tell at a glance whether each project meets their needs. They can also search for projects by age range, type of activity and whether the work is done indoors, outdoors, online or on a mobile device.

Many of the projects meet standards such as the Common Core State Standards and the Next Generation Science Standards.

“One of things I’ve seen citizen science do better than a lot other curricula is to really address the scientific practices in the NGSS,” Nugent says. “Basically in a nutshell, you’re doing science.”

Even if they don’t discover a new planet, participating in citizen science can help students discover an unknown passion for science and the real-world value of learning STEM subjects.

“There’s that light bulb that goes off,” Nugent says. “They find out science isn’t just in a textbook, and scientists don’t know everything there is to know. There’s more that we don’t know than what we do know. It’s so exciting.”