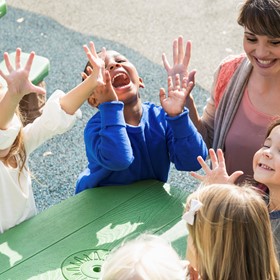 Nearly three years ago, Sean Gaillard spent a snow day catching up on some reading. Little did he know that an idea that would come to him that day would spark a movement.

Gaillard, a former North Carolina high school principal, an ISTE 2016 presenter, a BAM Radio Network blogger and now an education adviser for Buncee, was reading School Culture Rewired: How to Define, Assess and Transform It when a few words in bold print struck him: “What if we celebrated Mondays?”

The authors, Steve Gruenert and Todd Whitaker, were writing about creating an uplifting school culture for students and teachers. Along the way, they raised a question about what it would look like if instead of anticipating the weekend (TGIF and the like), we flipped it, and instead looked forward to Monday.

After spending some time reflecting on the idea, Gaillard says he had a “genius moment.” He began to wonder how he might make that happen at the school he was working for at the time and how he could lead the movement.

“I was trying to get teachers involved in PLNs (professional learning networks) and using social media, and I thought about creating a hashtag and using it as a way to highlight the best practices of our teachers to uplift them and, by example, encourage kids to be responsible digital citizens,” Gaillard explains.

And with that, #CelebrateMonday was born.

It didn’t take long for the hashtag to spread beyond John F. Kennedy High School in Winston-Salem, where Gaillard worked. Others began using it to spread positivity among the education community.

“It snowballed, in a good way,” he said. “Folks are hungry for a way to be positive, to get involved in a PLN. It’s taking those 140 characters and using them to trend positive and to uphold a friend or colleague in the profession.”

Today, the movement extends beyond Twitter and Gaillard's Twitter chat for educators, #EdBeat. People are Periscoping their #CelebrateMonday moments. They’re trying the concept in Voxer groups. They’re sharing the idea with students during homeroom. They’re bringing the practice to morning staff meetings. They’re sending uplifting handwritten notes. And people from around the world (England, New Zealand, Australia and the U.S.) are tagging Gaillard and other educators in their #CelebrateMonday posts.

The ripple effect is real. On any given Sunday, the hashtag is trending and it trends on and off on Monday and into Tuesday.

Gaillard is often on the receiving end of tweets and emails from people in his PLN who tell him they can't wait for Monday. They even nudge him late in the week seeking a reminder to celebrate on the upcoming Monday.

“If a teacher or principal is ignited or inspired by that, and it trickles down to our kids, so be it. There's nothing wrong with being positive and being unabashed about it,” he says.

Gaillard’s dream is to reach a million tweets “to see it take off and to see it become a norm.”

ISTE members are sparking movements and becoming catalysts for change. See what membership is all about and access free educator-created resources by clicking below.