Confessions of an ed tech advocate (you might be one too) 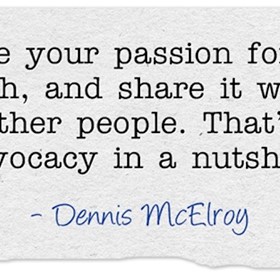 If you're so passionate about ed tech you can't help spreading the word to every educator you meet, you might be an advocate.

If you've got a vision for how technology can transform the way students learn, you might be an advocate.

For teacher educator Dennis McElroy, getting involved with advocacy has been less about becoming an ed tech advocate and more about realizing he already was one.

"Some people think being an advocate is kind of a scary proposition, that's it's a really difficult thing to do, but it's not," he said. "I tell future teachers that whatever subject they teach, they have to take their passion for that subject and share it with their students. That's advocacy in a nutshell. Take your passion for ed tech, and share it with other people.

As a district technology coordinator — and later a tech consultant for the Iowa Department of Education — McElroy was frequently called on to provide a voice for technology's role in education. It wasn't until he became actively involved with ISTE's advocacy efforts that he realized just how important it is for every educator to speak up about the importance of technology in the classroom.

"Getting involved literally has changed my perspective on a lot of things," he said. "It made me much more informed on a broader set of issues, and that just reignited my passion even further for the things that need to be done."

Last spring, McElroy took his advocacy efforts to the next level by attending the Washington Ed Tech Policy Summit, which gave him a close-up view of the state of politics in Washington as well as a deeper understanding of the policy issues surrounding education.

"It was eye opening, being exposed to the passion the people on the hill have for what they're doing out there and what they're trying to get accomplished," he said. "I came to realize just exactly how much politicians have to know about issues and the degree to which their staff has to conduct research and keep them informed. It was really mind boggling," he said.

Another big eye opener was learning about the role of the E-Rate program in bringing internet connectivity to schools around the country.

"What frightened me about that was that I served on the local school board for a few years, and we never once talked about E-Rate. After getting out of the summit with a new understanding of what E-Rate impacts, I was shocked and to some degree mortified that this is happening on a lot of school boards, that they aren't paying attention to things like this that impact them."

The experience inspired him to contact the Iowa Technology Education Connection, ISTE's affiliate in Iowa, and volunteer to lead the organization's advocacy charge.

"It gave me a sense of urgency and purpose," he said of the summit. "Someone needs to be pushing these issues out in front of the constituency."

How to be an advocate

It's a concept Martin Luther King Jr. understood well: Before you can effect change, you have to be able to dream it.

"The first thing you've got to do is be willing and able to dream. What do you want to see happen?" McElroy said. "It's about not accepting status quo but having that dream of what things really could be like."

Once you develop your vision, he added, you can get involved at the local level by:

"Take your dream with you every step of the way," he said. "That dream is going to evolve as you get exposed to things, but that's what drives your passion and your involvement."

When someone talks about advocacy, what do you think about? You may imagine ISTE members walking the halls of Congress or writing letters to their state legislators, sharing their values. These activities are…