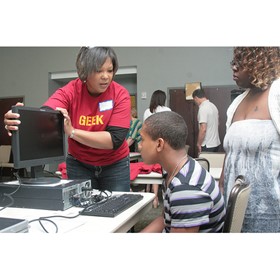 The E-Rate order approved today by the Federal Communications Commission was a significant improvement over FCC Chairman Tom Wheeler's initial draft proposal. We'd like to thank all of the educators who raised their voices and shared their input about how to best modernize the E-Rate program. We are pleased that, in the end, their voices were heard.

While the order is not yet public — and may not become available for a few weeks — we have learned some of its key points:

" "We applaud the commission's conviction to do what's right for education and launch a serious conversation about change that E-Rate truly needs more funding. Our community has spoken, and the need for additional support is real. The commission did the right thing today by issuing a Further Notice of Proposed Rulemaking on the E-Rate funding cap. We hope that a final decision on increasing the program's annual funding cap will come quickly.

" "We also appreciate the commission's willingness to listen to educators and make meaningful improvements to this order. We support many of the practical steps that the Commission adopted today and its commitment to retain the E-Rate's core principles and flexibility as the foundations of a modernized E-Rate program. We believe that the commission's efforts to promote Wi-Fi and broadband in our nation's classrooms and libraries, coupled with increased funding in the not-too-distant future, has the potential to provide all students with the connectivity necessary for learning in the digital age." "