Get girls coding to change the world 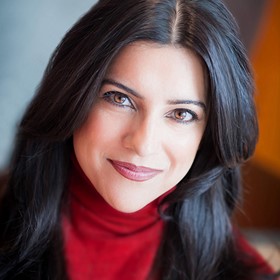 Girls Who Code founder and CEO Reshma Saujani is on a mission to change that. In just five years, her organization has grown from 20 girls in New York City to 40,000 girls in all 50 states – four times the number of women who graduate with computer science degrees every year in the U.S.

“Every solution we want to find in the next 100 years will involve technology, and if you give girls entry, they won’t sit on the sidelines anymore.”

A passion for getting girls off the sidelines and into coding and computer science is behind everything Girls Who Code does through its 80 summer immersion programs and 1,000 clubs where girls learn coding, robotics, website development and app making. Because when you introduce girls to computer science (CS), they get it.|

But that introduction is a necessity.

“I think girls today are not interested (in coding) because their connection to CS is a dorky guy in school who they are not friends with. We need to meet girls where they are at,” Saujani says. “If a girl says, ‘I want to be a doctor,’ she knows what that means. But they don’t know what being a computer scientist looks like, and we have to help them envision it.

And educators need to help answer the questions Saujani often hears from girls in her program. How do you find your passion? How do you recover from failure? Girls are still afflicted by perfection, Saujani observes, and we need to unteach that.

“It’s something that I’m very much thinking through. People need tactics. How do you be imperfect? I have a rejection note taped to my refrigerator. I keep it around to remind me of where I want to go and that I’m not ashamed of trying things and them not working out.”
And we also need to consider the benefits of having more female computer scientists.

In Saujani’s experience, women use technology to solve world problems, help somebody or fix something. She points to women’s efforts to provide clean water, understand dyslexia and reduce cyberbullying.

“They are constantly looking to make things better, and it’s not necessarily about them,” Saujani says. “It’s an important distinction between boys and girls, and that distinction is why it’s about changing the world. These girls will solve problems we’re not even thinking of right now.”

That’s because girls tend to be collaborative, like to work in teams and bring out the best in mixed groups.

“They problem-solve differently, and we all know that we come at better solutions if it’s not just you working alone,” Saujani says.

Not to mention the very real economic argument.

“If we don’t get girls coding, the high-paying jobs won’t go to American breadwinners who are women. We need it for the economic health of our country.”

Don’t miss Reshma’s closing keynote at ISTE 2017, followed by a Q&A with the audience. Arrive to the main hall early to get a good seat or watch a simulcast in one of the lounges. Jennie will sign copies of her book Girls Who Code: Learn to Code to Change the World in ISTE Central before at 12:45 p.m. the keynote.
Tags
Coding & robotics
Computational Thinking
ISTE Conference & Expo