How a group of kids helped Burmese refugees find jobs 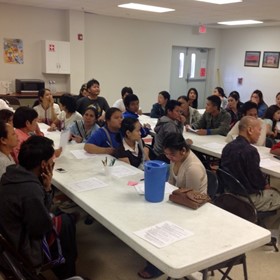 Joblessness: It's a problem even the U.S. government has trouble solving. But ask a group of middle school students to tackle it, and suddenly the lives of more than two dozen struggling refugee families become infused with hope.

When students from Neuse Christian Academy decided to take on the Belk Service Learning Challenge — a collaboration between Belk, ISTE and Discovery Education to help students use their classroom skills to make a difference in their communities — they scanned their prosperous hometown of Raleigh, N.C., to find out who had been hit hardest by the economic downturn.

They discovered a disenfranchised community of Burmese immigrants whose lack of English skills and cultural knowledge had impeded them from entering the American way of life.

The students began collecting items to help meet the refugees' basic needs, from clothes to school supplies to toiletries. But they quickly realized it wasn't enough.

"They started asking, 'What's going to happen to these people after the giveaways go away? Have we really helped them, or have we just put a Band-Aid on the problem?' " said teacher Les Burleson, who advised the students on their project.

After doing some research, the students concluded that what the refugees really needed was employment. So they brainstormed a list of obstacles that kept the families from integrating into their community.

"Number one was language, and number two was transportation," Burleson said. "So they asked, 'Is there anything we can do?' "

It turns out there was.

They began by hosting a job fair for the refugees and invited local employers with entry-level positions for hire. In the process, they learned that many employers hesitate to hire refugees for fear of potential legal ramifications. So a sixth grader called a local congressman's office and asked for resources to help explain to employers that they had nothing to fear.

From that effort, 15 people acquired jobs — and three have since moved on to better-paying positions with benefits.

For the students, the project has been a lesson in how to reach out for the resources they need to solve problems, Burleson said.

"Education doesn't just happen in classroom," he said. "It happens all the time all around us if we open ourselves up to it. The greatest educational opportunities come not from serving yourself but from serving others."

The project didn't stop there. After winning a grant from the Belk Service Learning Challenge, the students used the money to provide English training for the younger refugees and driver's training for the teenagers.

They also got other organizations from their community involved. Wells Fargo gave a class on opening a bank account, and the local police came out to explain how to obey U.S. laws.

"It just grew into something huge, and the way it has continued to impact lives is incredible," Burleson said. "I'm never amazed that young people can do over-the-top, life-changing things."

Kids possess the intelligence and drive to make a difference, he added. What they often lack is sufficient support from adults to get the ball rolling.

"This is where we're missing the boat in executing our philosophy of education," he said. "We teach kids to dream big and aim high, but at same time we cut them off at the knees. When they dream big, we tell them they're too young or they don't have the experience to take the first steps. We give them a view of the mezzanine and say, 'You can make it up there,' but we don't build the stairs for them to climb one step at a time.

"We can take kids who dream big and tell them that they can make an impact, they can achieve great things. Adults need to learn how to provide them with measurable next steps. Teachers have to learn the art of mentoring."