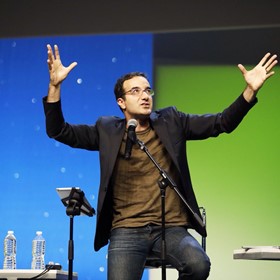 For everyone who worries they’ll feel sick at the idea of rocking the boat, Jad Abumrad has an uplifting message: Yes, you will.

The creator and host of Radiolab told the packed keynote audience at ISTE 2017 that he calls this feeling the gut churn.

It’s the place where you are uncomfortable.

Where you feel hopeless.

Abumrad knows it well. As a radio journalist, his career success revolved around how to build his own voice rather than imitate others. It was a test that required looking at things his way, creating his path and filling the emptiness before other voices rushed into his head to crowd out his own.

Along the way, he asked the wrong questions, stumbled in his research, slammed into some dead ends and hit the self-doubt gap — the same frustrations many educators experience when designing new approaches to their classrooms.

He offered these four encouraging tips:

Negativity is your catalyst to reach your goals. Uncertainty is like the dark German forest from fairy tales: It’s frightening every time you find yourself there, but after you survive six or seven times, you realize you can navigate your way out.

Allow the question to become your whole being. When Abumrad is stuck in a problem, he asks, “Am I putting all my nerve endings into this?” Because if you commit to pursuing the question, he adds, “you will probably not get where you think you want to go, but you’ll get somewhere else, and it could be beautiful.”

Do not accept anyone else’s fear. Others are always willing to add cautions or warnings disguised as advice. Kill that sucker. If you stick with your crazy idea, you might let someone down or your end result might not be perfect. But the outcome is not your purpose. It’s to ask the questions.

You will find your voice. While pursuing the seemingly impossible task of trying to describe to a radio audience how different animals would see a rainbow, Abumrad eventually decided to attempt to work with a choir to marry colors and notes.

Conducting that choir was an epiphany. “I thought this was something I couldn’t do; I thought it was something that would never work, and suddenly here we are and it’s working,” he said. “It was a little bit like if you were living in a house and suddenly you opened the door and you realize you have a whole wing of the house you never explored.”

But while he encouraged educators to dream big, the reality is that the world has its limitations. Abumrad uses the scientific theory of “adjacent possible” as his way to keep the balance: You don’t have to solve the world’s problems. Just find that one little move you can make right now that will open up myriad possibilities.

And that is the reason educators, in the end, don’t mind the upset stomach.

Jad’s talk was the first of three inspirational keynotes at ISTE 2017. Don’t miss Jennie Magiera on Tuesday and Reshma Saujani on Wednesday.