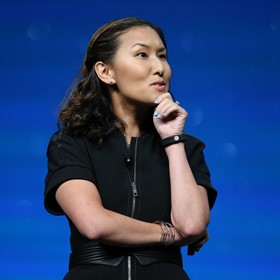 Jennie Magiera’s résumé explains why she was on the keynote stage at ISTE 2017. She is a the chief technology officer for Des Plaines School District 62 in Chicago. She’s also a White House Champion for Change, an Apple Distinguished Educator and a Google for Education Certified Innovator. She served on the Technical Working Group for the U.S. Department of Education’s National Educational Technology Plan, and she wrote the book Courageous Edventures.

It’s a picture of a role model.

But, as Magiera asked her audience, “If you try to be me, who will you be?”

Empowered learning highlights why we need to allow students to find their voice, but, as Magiera reminded the enthusiastic audience, it’s just as important for educators to do the same. She shared these five ways to shine the light on your world:

Tell the untold story of limitless potential. Magiera may have been excited about a week-long coding class in her district, but three elementary school girls were not. “I’m a girl” was their reasoning. But rather than delivering a lecture or a pep talk, Magiera threw down a challenge: Try it on Monday, and if you aren’t coding by Tuesday, you can do whatever you want for the rest of the week.

By Thursday, the girls had programmed the Dash robot to replace the fourth girl on their dance team who would have to miss an upcoming performance. And their message to Ms. Magiera? Girls can do anything.

Your community is full of similar moments to pass along.

Be a wizard. Thanks to an eccentric fourth grade teacher who led her class in hunts for imaginary dragons and handed young Jennie The Hobbit, Magiera adopted the idea that teachers are fun-loving wizards who can help you find your whole self.

So, today, if you were to meet her husband at Starbucks, he would share his love of craft beer and barbecue, but not his profession. Magiera, however, tells you immediately what she does for a living. “Because being an educator is not just what I do. It’s who I am,” she said.

You, too, can invite folks to join you on the adventures you are arranging.

Treat resistant colleagues as friendly dragons. Networking at ISTE conferences are an emotional boost for Magiera, but when she returned to the Windy City, colleagues ran and hid from the crazy tech lady. She admitted the let-down led to resentment at times. But it’s the same situation as a story from her childhood about a dragon who terrorizes villagers because he’s in pain. “Take a step back and listen to what [your colleague’s] problem is. If you have the kindness to help them with their problem first, even if it’s unrelated to your goals, then you’ll be amazed at how they can become your greatest ally,” she shared.

Show your warts. Studies show that humans live a happier life on Facebook and Twitter than what is actually happening in their homes. But when Magiera went out on a limb and shared her fears and anguish about infertility, within a day, she had 288 likes and 75 comments. And 100 people called, texted or showed up at her door with a hug.

Her takeaway: Always being positive can be intimidating. Don’t hide those setbacks, like syncing the wrong video on a classroom of iPads and handing students Hot Tub Time Machine rather than Volume of a Pyramid. Yes, Magiera assured, she survived that goof.

You don’t need an audience. Technology means you don’t need a stage to convey your message – put it out there and the world will find it, starting today. Magiera encouraged attendees and educators everywhere to grab selfies, record videos and share them with the hashtag #ISTEStory. Her students will build a presentation using their pick of these clips on the ISTE webpage after the conference.