Learning happens in a zigzag and that's OK 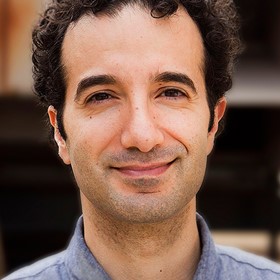 Jad Abumrad is quick to say he doesn’t feel comfortable giving educators advice, and yet his career in radio touches on many topics educators are familiar with.

Abumrad, host and creator of public radio’s “Radiolab,” will be the opening keynote speaker at ISTE 2017.

“I firmly believe that if the act of teaching could be closer to the act of living, that would be a good thing,” Abumrad said.

“Teaching and learning shouldn’t be things that happen in an artificial space," he said. "They should happen in as messy and chaotic a way as the rest of our life happens.”

Abumrad has said that “Radiolab” was a product of his tinkering with an idea for a show that would include dialogue, sound effects, music and interviews. Educators might call it inductive learning, and the idea of tinkering certainly connects with today’s makerspaces.

But what Abumrad knows for sure is that tinkering can help learners externalize their thinking “by fumbling around to find the other piece of your idea.”

He recalls tinkering around to solve the problem of defining a radio show without using a theme song, but instead by using sound. He spent hours creating 25 versions of layered voices and glitchy edits that would play at the top of “Radiolab.” It became a signature of the show.

“I feel a lot of my own development has been like that. The material somehow teaches you something and you keep tinkering until it feels good,” Abumrad explained.

It’s an education industry debate. Can curiosity and creativity be taught? Abumrad says, based on his experience, the answer is “yes.”

He says “Radiolab” co-host Robert Krulwich turned him on to the idea that nothing propels you like a really well-asked question. “If you have a good question, you have tension and suspense. It’s like having booster rockets on,” Abumrad said. “I’ve learned that if you surround yourself with people who are relentlessly curious, you begin to get that practice and get that muscle.”

He describes it as having a sense of unease about the information that’s being provided and then pressing to know the question behind the question.

“I didn’t start by being someone who woke up and had a relentless curiosity about the world. I worked with people who do, and I just sort of stole their moves,” Abumrad said. “We need to allow kids to understand what it feels like to have a question and then give them permission to ask it.”

As a self-proclaimed late bloomer, Abumrad acknowledges that he didn’t learn in a straight line, but rather stumbled his way through things, wishing along the way that others were familiar with the way he learned.

“Learning happens in a strange zigzag that’s not neat. We try to clean it up and make it a set of facts, but it’s not that way.”

In his experience, if there was room for learning to be messy, it might be more interesting for students.

“Radiolab” listeners have become accustomed to the show’s cadence. The interviews are not always clean. Speakers stumble. There are pauses. Flubs are part of the vibe.
Abumrad says those mistakes make the show more authentic and acknowledge the unnatural artifice that exists when people are placed in a studio in front of mics and separated by panes of glass.

Mistakes happen and they don’t have to be edited out. Imagine if that thinking were applied to learners.

“If you start in a prosaic place and think, ‘what’s going on here,’ and you fumble and you ask the dumb questions that get you to the next questions, and you don’t pretend you know more than you know and you flail through the dark until you hit on something ... the spirit of the show is more of a stumble than a podium-style presentation,” Abumrad described.

And he thinks that willingness to make mistakes is beneficial, even scientific.
“Nothing we do is definitive. We do our best and we try to get everything right, but at the end of the day, every sentence that comes out of our mouths is provisional. And that’s how science is.”

The New York Times asked Abumrad why anyone would create a new aesthetic for the retrograde form that is radio. A similar question could be asked of the education system. Why attempt to change the factory model?

Abumrad said his contribution to transforming radio was inadvertent, based in trying to do something others hadn’t and rooted in his experience as a musician.

But he pondered the question, why try and change the way things are taught?

“I actually think the way things are taught is a little like how I feel about any meeting I go to. You can have a plan for a meeting, but every third meeting, you have to throw the plan away. You have to blow it up.

“Teaching is one of those things that inherently has to be blown up every few years. By its essential nature, it should be continually rethought because in some sense, the act of learning should embody the spirit of learning. And the people doing the teaching should be constantly learning how to recalibrate. I feel like the idea of blowing up your preconceived forms should just be something that has to happen – like every quarter.”

Don't miss Jad's keynote at ISTE 2017. Arrive early to get a good seat or watch the simulcast in the lounges or in the overflow room at the Stars at Night Ballroom, where Jad will answer questions after the main event.

5 Strategies To Embed Assistive Learning in Every Classroom (Not Just Special Ed!)

Assistive learning strategies have long been the domain of special education teachers, who have often been called upon to help general classroom teachers adapt lessons for students who need extra supports.

But all that changed during the pandemic. Many educators discovered they had to…