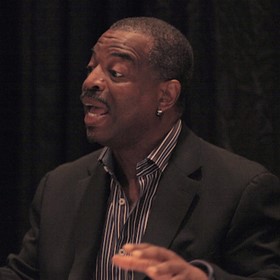 You might call LeVar Burton one of the earliest ed tech adopters.

In 1983, just four years after the first ISTE conference (known as NECC in those days), he began using the prevalent technology of the day — television — to engage kids in reading. As host of the long-running show "Reading Rainbow," which celebrated the value of books, Burton shared his love of the written word with kids across the United States.

On the heels of his wildly successful Kickstarter campaign to bring the newest evolution of "Reading Rainbow" — now a tablet app — to classrooms for free, Burton stopped by ISTE 2014 to talk with educators about the intersection of technology and literature.

"We're all walking around constantly engaged with our devices. To not take advantage of the engagement factor is really silly. We just need to provide the right kind of content on these devices," he said.

"All media is educational. The question is, what are we teaching? Are we teaching with intent, or are children picking up lessons, values and learning things as unintentional consequences as part of the media to which they're exposed?"

Burton launched his Kickstarter campaign with the goal of raising $1 million in 35 days. His message resonated so strongly with those who fondly remember him as a childhood staple — first on "Reading Rainbow" and then as Geordie La Forge on "Star Trek: The Next Generation" — that he hit his mark in less than 24 hours.

After issuing a tearful thank you to his supporters, Burton revised his goal: Raise $5 million to bring the app to more platforms and provide free subscriptions to 7,500 classrooms. As of Sunday night, donations had surpassed $4.5 million.

"We just have to convince kids that reading is sexy and then we're done," he said. "Parents ask me all the time, 'How can I get my kid to read?' I ask them if they have connected what their child is passionate about to the literature they're asking their kids to consume."

Depending on whom you ask, " "Reading Rainbow" " is either an outmoded TV show that lost its usefulness or a wildly successful experiment that was sacrificed at the altar of No Child Left Behind. In either case, the Department of Education's approach to literacy programming shifted from fostering a love of reading to teaching the mechanics of reading, and by 2009 PBS decided it could no longer justify the cost of keeping its third longest-running show (and winner of more than two dozen Emmys) on the air.

" " 'Reading Rainbow' is not about the rudiments or the fundamentals of reading," " Burton said on NPR. " "It's about the passion. It's about learning how to love the written word and developing a personal relationship with literature and having that be a part of your life, for the whole of your life." "

At ISTE 2014, Burton's passion shined through when discussing the impact of No Child Left Behind on literacy in the United States.

"Hopefully No Child Left Behind is in the rear view mirror and we're no longer teaching to the test," he said. "I think we suffered as a result of it. Every day, we see kids at the college level who struggle with writing.

"A healthy society doesn't have to make the choice" between teaching phonics and helping kids discover the joy of reading, he added. "We need to re-prioritize where we're going to put our emphasis in the next evolution of education. We used to do a tremendous job of giving Americans a classical education. We haven't done that in decades."

Reaching the next generation

Despite being displaced by shows that teach the mechanics of reading instead of stoking passions, " "Reading Rainbow" " lived on. Burton adapted the show into an app for the iPad and Kindle Fire, creating a digital world in which kids explore the power of imagination through a library of interactive books and video field trips intended to help young readers connect literature to the real world, " "reinforcing the idea that you can go anywhere and be anything — just pick up a book," " Burton told People magazine.

"A very important part of the 'Reading Rainbow' experience was tying what children were reading back to the real world. It provided inspirational value as well as informational value," he said Sunday.

His timing was impeccable. The " "Reading Rainbow" " app, whose library has expanded to include more than 400 books and nearly as many video field trips, launched right on the heels of Secretary of Education Arne Duncan's challenge to schools to embrace digital textbooks within the next five years. Teachers began adapting " "Reading Rainbow" " for use in the classroom, and kids now read more than 180,000 books each week through the app.

"The opportunity to have a literal library of thousands of books is unprecedented in the history of humanity," Burton said. "The fact that you can carry around in your hand all that is accessible to us in the written word throughout history of civilization — we've never been here before, y'all. We've never been here."

Shira Lee Katz, senior director of education content for Common Sense Media, which evaluates digital tools for learning and teaching, praised the "Reading Rainbow" app for its ability to engage, teach and meet the needs of students.

"Only 5 percent of the products we evaluate get our highest rating, and 'Reading Rainbow' is one of them," she said.

For ed tech enthusiasts, the successful evolution of " "Reading Rainbow" " serves as an example of harnessing changing technology to deliver learning in a time, place and manner that resonates with students.

" "The conversation back in the '80s was: Is television the enemy of education?" " Burton said in an interview with ThinkProgress. " "It was no secret to us where America's children were spending their time. We just went to the point of purchase, where kids were hanging out, and brought them back to the written word.

" "And we're doing the same thing now, using the prevailing technology of the day. Then it was TV, now it's digital media. And we're using that very important engagement factor to feed them something worthwhile." "

Of course, for many of the Millennials and Gen Xers who grew up on " "Reading Rainbow," " no app can replace the original TV show that sparked a passion for books in so many kids. Remember this?