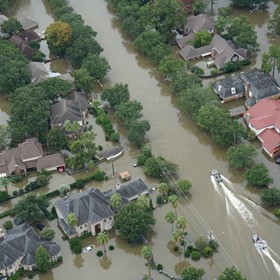 When many students in Texas and Louisiana should have been returning to school in August, they were instead hunkered down in homes or shelters while flood waters rose around them. Trapped, all they could do was wait.

What to do on such an epic rain day?

Wood Creek Elementary second grade teacher Kathryn Butler Mills had an idea. From her home in Katy, Texas, Mills created a public Facebook group to encourage kids to read as they waited out the hurricane.

Mills started the Hurricane Harvey Book Club with invites to 70 of Mills' students, fellow educators and friends. Less than two weeks later, it had swelled to more than 53,000 members. The page features videos of members reading their favorite books aloud to help take students’ minds off what’s going on outside.

Many of the schools in Houston were inundated by the floodwaters while others were transformed into temporary shelters. The Texas Education Agency reported that 181 districts canceled or delayed school. In Houston Independent School District at least 35 buildings out of 300 sustained some type of damage.

“Our city is just broken right now and thousands are homeless,” Willery said. “We haven't planned anything beyond basic survival at this point. There are an estimated 30,000 and counting in shelters right now with only the clothes on their backs.”

Karen Justl, educational technology director at Spring Branch ISD in Houston, said it was just too soon to tell how soon her district would be able to shift their focus from survival to learning. "It has been a very challenging time with rapidly changing situations," she wrote in a discussion thread on ISTE Commons. "As for using technology to keep the learning going, we as a system haven't gone there. Situations are desperate for many of our families. They left their homes with the clothes on their backs. All efforts are focused on taking care of families and supporting those in need."

Those who have been through disasters before say while it can seem impossible during the brunt of a disaster, they have discovered ways to get students connected again as soon as possible.

Calcasieu schools, some of which are in bayous and low-lying areas that are prone to flooding, were closed for 30 days after Hurricane Katrina, which was quickly followed by Hurricane Rita. During that time, Calcasieu used the district's learning management system to offer content, assignments and other opportunities for students.

Abshire says sometimes people wonder why it matters if they stay connected when school is not in session. “Learning isn’t just in the walls of the building anymore,” she says. “It’s 24/7. We have so many online classes and so much content online that it is a safeguard and helps all of us sleep at night knowing we’d be able to continue.”

Shoring up the infrastructure

But in order for that to happen, teams have to make sure the infrastructure will hold up in a catastrophe.

Calcasieu’s disaster recovery team meets regularly and has made important changes, including installing a natural gas generator for the network operation center. Unlike most generators that run on gasoline, the natural gas is delivered underground and provides a more secure back-up power system.

In addition, all employees are trained to unplug devices and get them off the ground when an event is forecast.

Calcasieu Schools were relatively lucky during Harvey, which closed schools for only three days. The network operation center did not get wet although the Tech Training Center across the street did.

Even if the power had gone out, the superintendent and chief information officer could have quickly sent out emails, texts and phone calls to every family and employee in the district from a cell phone app.

Enlist students to help out

Karen North, a computer science education researcher and a member of ISTE's Computer Science Network, hopes that schools will take advantage of opportunities to empower learners.

She suggested that districts could offer high school students community service credit hours instead of seat time. "So many want to help, but need leaders to make this happen," she wrote on the ISTE Commons thread. "My grandson's house was flooded and he would love to help re-build and help his neighbors that were flooded by Buffalo Bayou."

They could also help out in the classroom, she said. "Give high school students time to go into the local elementary school with unplugged and maker activities. Teachers are going to be dealing with so much and need a helping hand."

Hurricanes aren’t the only weather events that can damage schools and interrupt learning, of course.

On May 22, 2011, one of the costliest tornados in U.S. history struck the small community of Joplin, Missouri. Joplin schools lost seven students and a staff member; five schools were destroyed and several others heavily damaged. In all, 4,200 students had no school to return to.

Despite the devastation, all Joplin schools opened on time the following August, and students returned to a district that had reinvented itself.

“Joplin Schools did not simply rebuild in the image of its former self,” wrote Traci House, an ISTE member and the district’s director of technology. “Instead we seized the opportunity to become even better by implementing a one-to-one initiative, complete with a new all-digital curriculum.”

House described the district’s transformation in the December 2012 issue of Learning & Leading with Technology. “We could have crumbled as a school district the way the walls of Joplin High School did on May 22,” she wrote. “But … we’ve grown and shaped into a district that’s even better than the one we had before.”

Want to help schools affected by Hurricane Harvey? The Teacher Disaster relief fund, organized by the Texas branch of the of American Federation of Teachers, is accepting donations that will go directly to its members. The Houston Independent School District has its own charitable foundation that is now accepting donations for Harvey victims. If you wish to adopt a specific school in Houston, this spreadsheet provides basic information and contacts.