Teach kids to find the math in video games 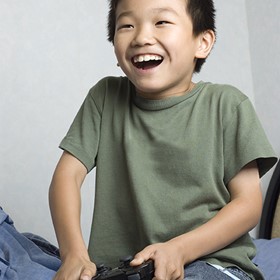 " "Essentially, you're looking at a game and asking, 'Where's the math in this game?' You're trying to get kids to find the math in whatever they're playing," " said Matthew C. Winner, co-author of Teach Math with the Wii.

Video games are loaded with opportunities to teach math and myriad other STEM-related subjects, Winner said — if only educators would take the time to discover them.

" "In grade school we're always trying to relate math to the real world. Some kids have been good at video games their whole lives and never realized they were doing math the whole time," " he said.

A teacher librarian who was raised on video games himself, Winner began using the Wii as an instructional tool and discovered it's not only an effective way to obtain student buy-in, but it also helps bolster those who struggle in school.

There's no question that kids love video games. When they play in Winner's library, " "they're engaged, activating parts of the brain that are normally inactive," " he said.

By tapping into that passion, educators achieve more than simply getting kids' attention. They're also validating something that's an important part of students' lives.

" "These children have been playing games all their lives on consoles and handhelds. We can't say video games are separate from what we're doing because when we teach, we need to be teaching the whole child," " Winner said.

It's easy to assume that video games are just a useless distraction. But kids are actually building skills while they play — often without realizing it.

" "The average gamer will log so many hours into playing video games that by the time they're in eighth or ninth grade, they've hit 10,000 hours," " Winner said.

" "What do all of those hours logged into video games mean? What exactly are they good at? How does this skill lend itself to the learning process?" "

Finding and leveraging those skills in the classroom can help boost student confidence.

" "You're building confidence for those kids who aren't good at anything. This is a chance to show them that they have a strength and that it connects to a lot of things. They're doing a lot of math, but they might not realize it's math." "

The math lessons available in video games aren't limited to what happens in the classroom. The key is to teach kids how to relate their hobbies and passions back to the learning they're doing in school.

" "We have effectively told children they need to go home and play video games while thinking like a mathematician," " Winner said. " "This is a currency we can use with kids. It's not only motivating, but it's really, really effective — just as we tell kids to go home and read books at night." "

That's why it's important to bring parents into the conversation to help continue the learning at home.

" "Talk to parents and kids about how they can all be gaming together and having these conversations together. Raising awareness is good advocacy. It helps parents realize there's another way to approach this. Are you letting your child just play video games all by themselves, or are you having a conversation about what's going on?" "

Teachers who are hesitant about introducing video games as a way to teach math and other subjects should keep in mind that it's not necessary to be good at video games yourself to use them as a teaching tool, Winner added.

Matthew C. Winner is a teacher librarian, ISTE award winner and co-author of Teach Math with the Wii.