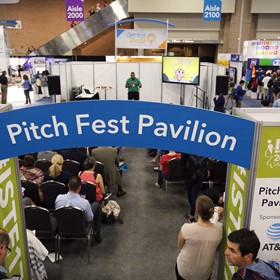 Pitching. It’s a format that’s familiar to entrepreneurs and television viewers around the world thanks to television shows like “Shark Tank.”

Attendees at ISTE 2017 got a taste of the fun and excitement at this year’s Edtech Start Up Pitch Fest where company representatives had five minutes to present their product, followed by three minutes of questions from judges.

This year, the fifth for the event, 70 companies submitted ideas, 12 were selected to make their pitches and five companies mde it through preliminary rounds to the Pitch Fest final held Tuesday at ISTE 2017.

In the end, two start-ups won the hearts and minds of the judges and audience members who voted to select a winner in two categories: Most Innovative and Most Likely to Succeed.

Earning the award for Most Innovative was BrainCo Tech. Winning Most Likely to Succeed was codeSpark.

Based on the data collected from the headbands, teachers can adjust their practice to increase student engagement, identify students who need extra attention, track improvements over time and help students improve their attention abilities, according to presenter Max Newlon.

Newlon also sees uses for the devices for teacher professional development and to help students learn about how they can improve their attentiveness.

Teaching the ABCs of computer science

CodeSpark’s Academy with The Foos teaches young learners basic coding and computer science concepts, including logical problem-solving and algorithmic thinking. In addition to completing curriculum-based puzzles, students can use the tool to create games and videos.

The tool is self-directed by students and doesn’t require teachers to have computer science expertise. CEO and co-founder Grant Hosford said he created the tool after being unable to find a way to teach the ABCs of computer science to his young daughters.

CodeSpark features powerful female characters, focuses on creativity and making and is free to schools and libraries.

At ISTE 2017 and fascinated by innovative edtech products? Head over to the expo hall to see thousands of tools and products.