What if kids hold the solutions to our biggest problems? 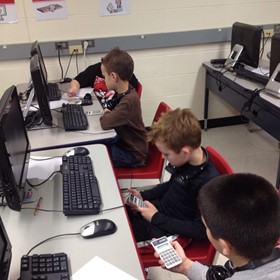 Kids possess amazing brains. Their capacity to adapt and solve problems can make adult jaws drop at times. Yet all too often, students spend that brainpower on busywork whose end result consists of nothing more than another paper to take home in their backpacks.

What if, instead, we harnessed their intelligence to solve real-world problems?

In a cross-country collaboration between two classrooms — one in Maryland and one in Indiana — Winner and Gick devised a project in which third grade students chose an environmental challenge to study within their own schools and then delivered their findings, along with their proposed solutions, in a TED Talk-style presentation.

"We were inspired by the TED Talk revolution and wondered what that would look like at the elementary level," Gick said.

Their goal was to stand back and act as guides through an inquiry-based project that was entirely student driven. The students chose issues that interested them, brainstormed ways to approach the problem and experimented with different solutions.

"We push for success in education, and if students don't get it right, there's such a stigma on failure," Gick added. "We don't let kids explore possibilities. It crushes them so soon. They need to know it's OK to try things. There are so many lessons to be learned in the failure. It's so practical to go back to square one and say, 'That didn't work, what can I do better next time?' "

Winner's students chose to tackle energy conservation. They looked for ways the school might be wasting electricity, such as leaving computers plugged in overnight, and started collecting data.

"Like the TED Talks, we told them to come up with an idea you think can affect our world, and then share it with the rest of the world," Winner said. "We worked hard to remain hands-free with the students. We would facilitate, but they came up with all the inquiry."

They brought in experts from their county to show them how to measure energy use with various tools. Students then calculated how much energy — and money — their school was wasting over the course of a year.

"As much as they could do, they did," Winner said. "I told them, 'I don't care if your idea doesn't work out, because the most important thing is it's your idea. You're seeing it through, reflecting on it, seeing if we changed the school a little bit or at all. The bottom line is that you changed in the process.' "

An overflowing trash can in the corner of the classroom inspired Gick's students to focus on recycling. They put a recycling box in their classroom and experimented with different methods for measuring the paper they collected — from making tally marks every time a piece of paper went into the recycling box to sizing stacks of paper with rulers — before settling on weighing as the most practical approach.

They tracked their recycling efforts over eight weeks, then calculated how much paper they could divert from the landfill if the whole school participated in their efforts.

"Problem solving as a group is a lot more difficult than just coming up with a solution yourself and fixing it," Gick said. "You have to try other people's ideas. There's that give and take that's so important for students to learn. They don't practice those skills very often. We don't give them many chances to brainstorm and talk back and forth about what the possibilities can be and try them out."

The TEDxElementary project was such a success, Winner and Gick plan to repeat it this year with a new batch of students. They've also created a model so other educators can replicate their idea.

When they presented their model at the American Association of School Librarians conference, many other librarians expressed an interest in conducting similar projects. Winner and Gick hope to gather as many interested educators as possible to participate in the project and share their results at a virtual event they're dubbing Genius Con.

"We want students to know their ideas are being heard at a level they're not used to being heard at," Winner said. "Other people in school are hearing your idea. Your voice is important for teachers, principals and the community to hear.

"We can't change worldwide unless we can change our schools and classrooms."

Know any educators who are doing innovative and inspiring things? Nominate them for an ISTE award!

Ryman Yang spreads a bolt of fabric out neatly on his basement floor. Pattern pieces are pinned neatly on top, ready to guide his scissors as he prepares to make a new pair of snow pants. Like many students, the sophomore at Oregon’s South Eugene High School found himself with lots of extra time…