Wildly popular, then off the grid, virtual worlds are back in ed tech 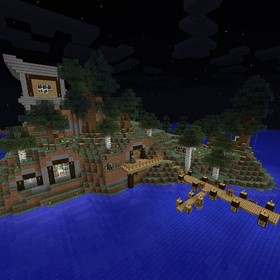 Ask almost any elementary-aged child about Minecraft, and his or her face will light up, describing more about the video game than you ever wanted to know. It's this enthusiasm for virtual-world play that could add a whole new dimension for educators looking for a way to engage their students through technology.

Using the virtual world in education isn't a new concept. According to Andrew Wheelock, technology coordinator at Erie 1 BOCES (Board of Cooperative Educational Services), virtual worlds were wildly popular in 2007, when Second Life exploded onto the scene. Second Life got educators excited about the possibilities of using the virtual environment in the classroom. However, that excitement was short-lived, and as quickly as it came, virtual worlds fizzled out, at least for education purposes. Wheelock has a theory on why virtual environments didn't take hold back then.

" "Even though Second Life was so popular, it was kind of the Wild West of virtual worlds, and that scared some educators off," " Wheelock explained. " "It was too open, it was too free-wheeling, and it wouldn't work in school." "

In its heyday, Second Life was best as a tool used to introduce students to history. It was ideal for creating historical environments and settings to give the students a real-feel for times and places, like ancient Rome. But that just provided a visual setting, and there was no " "what's next" " in where the virtual environment would take students.

Fast forward to today, and there is a renewed interested in virtual worlds. The popularity of Minecraft plays a role in this revitalization, but there are other alternatives that are available. OpenSim, for instance, allows users to build and create and take advantage of all the coolest aspects of Second Life, all through open source software that is free. Because students are familiar with and eagerly engaged in virtual world environments, there may be no better time for educators to introduce the technology into the classroom.

" "Minecraft in particular has brought educators back to the notion that virtual environments, with creation and gaming elements, can be a powerful learning tool," " Wheelock said.

Tapping into the budding artist

Today's virtual worlds bring in a much more creative environment. Students are encouraged to create and build these fantasy worlds. Wheelock said using virtual worlds in education could introduce artistically inclined students to a range of career possibilities that they may not have known were available.

" "I think there is a whole artist movement going on, and that's something that has been lagging in schools lately," " Wheelock said. " "Today's artists can go into fields like game design, and it could be a career that's very lucrative." "

He added that using virtual worlds in the classroom can also provide a foundation for students going into other, nontechnical fields. He points to construction as an example, where professionals are turning to CAD software for building projects. Virtual worlds provide the basic stepping-stone knowledge for using technology later in life.

In his upcoming ISTE Professional Learning Series webinar, " "Fizzle or Sizzle? Virtual Worlds in Education," " Wheelock will showcase educators who are using virtual worlds in the classroom. He will share his own experience with using OpenSim, as well as an overview of using Second Life as an educational tool. While Wheelock will go into more depth on using virtual worlds in education in his webinar, he has a few tips that can get educators started using gaming technology in their classrooms:

Play some games. Tap into the resources that are out there, like the PLN, and dig into some of these games to get the feel of how they work.

Learn from students. Ask students why they are so excited about games like Minecraft and use that information to try to engaged them in other technologies.

Let go of the reins. Accept that it's a mindset, not a skill set. Teachers need to provide supervision, but perhaps offer less control over the way the students are learning. It is recognizing that today's students learn differently than students of 10 or 20 years ago, and the classroom environment needs to adjust to these newer methods.

To dig deeper into virtual worlds, check out Wheelock's webinar and join the Virtual Environments Network, both free to members!