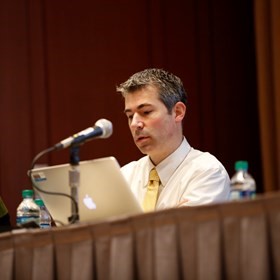 Richard Culatta, director of the Office of Educational Technology at the U.S. Department of Education, has announced he will step down at the end of the year.

He is returning to Rhode Island, his home state, to work in state government in a currently unspecified role designed to accelerate innovation. He will also begin a residency at IDEO, a design and innovation consulting firm based in Palo Alto, California.

Culatta has long been a collaborator, supporter and friend to ISTE.

"Richard has been a dynamic, high-energy driver for the things that all of us in education and in ed tech care about," said ISTE CEO Brian Lewis. "He has helped so many of us advance the work we do, and he's done it with incredible spirit."

ISTE worked closely with Culatta on the update of the E-Rate program and, more recently, on the issue of open educational resources (OER).

"He's not only incredibly knowledgeable, but is incredibly well-liked as a positive pied piper for ed tech," Lewis added. "He's known and respected for his ability to move important ed tech agenda items forward very quickly."

At ISTE 2015 in Philadelphia, Culatta was a presenter at a session on the Obama administration's Future Ready program, aimed emphasizing the importance of building human capacity along with digital connectivity within schools and districts to transform learning and teaching. He was a recipient of the Making IT Happen Award at ISTE 2014 in Atlanta, and led a session on the ConnectEd Initiative and E-Rate at ISTE 2013 in San Antonio, where he was also among the judges for the Ed Tech Start-Up Pitch Fest.

In October, Culatta brought together at a White House event a number of stakeholders who are working to make the possibility of OER come to life more swiftly and meaningfully.

Lewis, who was in attendance, said the event brought renewed attention to the OER effort. "A lot of great people have worked on this idea for a while now, but Richard was able to call people together and recharge the effort."

Joseph South, currently the deputy to Culatta, will serve as acting director for educational technology.