A sketchy approach to learning 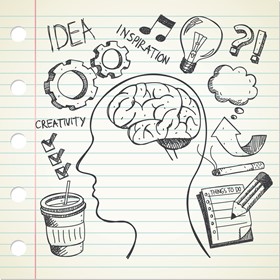 Adult coloring books are the latest fad for a stressed out workforce looking to zone out with some easy creativity. Before that, it was smashbooking, or the craft of randomly layering photos, mementos and memories into a notebook on the spot. The recent Bible journaling trend isn’t as messy, but still involves slapping colored tape over verses, stamping in the middle and even water coloring right over the words in the Good Book.

Isn’t it time we give our students the same freedom?

Consultant Sunni Brown, named one of the most creative people in business, may be the most famous advocate for doodling at your desk, but scientists back her play with research results that draw the same positive conclusion. In the lab, participants instructed to doodle during a routine phone message remembered 30 percent more information than did the control group.

A troika of sensory input

What that means is doodling rocks your creativity muscles because it’s like a zip file, containing more details in a smaller space. So count on this group to have a better memory, their brains slow to a pace where they can absorb information and focus clearly (that’s not daydreaming going on in the back of the room), and because they’re not overthinking details, they grasp the big picture more readily.

Even better, educators are finding proof that sketching, scribbling, shading and shadowing are particularly effective in helping the brain latch onto science and math concepts. As far back as 2011, classroom experiments in Australia point to the idea that pen work during these lessons strips away the rote, passive veil from learning formulas. Think of doodling as a way of unclogging a pipe so the water can rush through.

And the enjoyment factor? That’s an added bonus, as coloring book aficionados know. Just ask Shelley Paul and Jill Gough, two directors at private schools who teamed up to try this doodling thing for themselves during a conference. Both saw the same results as the researchers, and their classroom teachers who have implemented it report the same.

Doodling is not for everyone — or every subject

The trick is to realize that individual learning styles drive this buggy, so some students may very well be zoning out through the technique instead of tuning in. In fact, doodling does seem to have a negative effect on visual recall, which is logical. “If we draw or sketch, that’s activating the visual pathway, so we’re using our audio senses to take in information. But our output is visual, so there isn’t that traffic jam,” Gough notes. Ask to use your eyes for two things simultaneously, and one of the two will get short-sheeted.

It also helps when teachers frame students’ doodling to the topic being discussed rather than random Superman symbols, houses and clouds and stick figures previous generations scrawled in the notebook margins.

Digital tools are a help instead of a hindrance in that regard, as they can quietly pull in colors for emphasis, a technique that’s not always at their fingertips or allowed with school-issued textbooks. Depth and perspective is also easier to produce on a tablet rather than freehand.

To give it a whirl in your classroom, check out resources like You Doodle, ASketch or Jot! Whiteboard for iPads or Google Drawings or InspirARTion-Sketch & Draw! for Chrome-based tablets.

Then, consider the next logical step in digital doodling: sharing your or your students’ sketches on social media. Sure, it can be scary for nonartists to share their work, but tweeting out graphic notes has been shown to generate support from other doodlers. And who knows, maybe the doodles you share will help another learner understand a difficult subject or be just the right memory cue for an upcoming assessment.