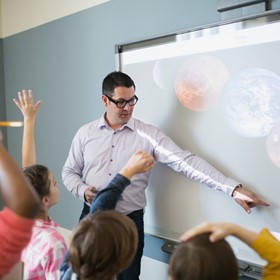 Astronomers needed help. A telescope-mounted camera on Mauna Kea was capturing millions of images of the sky — a potential gold mine for detecting space warps, or gravitational lenses caused by massive objects, which could serve as a magnifying glass for observing distant galaxies.

But first they had to find them.

Space warps show up in images as a halo or arc around a visible galaxy. Computer algorithms seemed the fastest way to detect them, but they’re too easily confused to make accurate classifications. What astronomers really needed were human brains. Lots of them.

“Our brains are better at recognizing patterns than almost any other brain there is,” says Ariel Zych, education director for Science Friday, a weekly radio show and podcast. “They’re better at it than algorithms are.”

To enlist help scanning the images for gravitational lenses, scientists uploaded their data onto Zooniverse, a web portal for citizen science projects. They partnered with Science Friday to broadcast an episode about space warps, which included a call to action: Help sift through a million images and identify possible space warps. It seemed like an ambitious goal, but no one knew what to expect.

Within an hour, citizen scientists from around the world had already eyeballed more than 30,000 galactic snapshots. By the following week, they had blown past their goal, classifying more than a million images and revealing some fascinating discoveries, such as a galaxy more than 7 billion light years away.

Unlocking the potential of citizen science

The Space Warps project is just one example of the wave of scientific collaboration that’s sweeping the globe. As scientists attempt to mine overwhelming amounts of data for new discoveries, they’re increasingly asking citizens to help them collect, observe and classify information to pinpoint areas for closer study.

Around 1.6 million people from all over the world now participate in citizen science projects on Zooniverse. From scanning images of stars to taking photos of wildlife to observing the clouds, citizen science is something anyone can do — usually with no equipment other than the mobile device in their pockets. Not only do regular people get to collaborate with scientists, but those who participate in exciting discoveries could also end up as co-authors of published research papers.

Citizen science is also catching on in schools, where classrooms can do real-world science while collaborating with other participants from around the world. Not only does it help teachers meet the ISTE Standards for Students, but it also has the potential to get kids excited about science.

“It cannot be overstated how important it is for young people to feel like they’re at a level with experts and adults. It opens their minds to their potential for achievement,” Zych says. “Citizen science could be the thing that promises there’s a place for them in science if they stick with it. It’s an incredibly powerful tool for shoring up the stem pipeline.”

Taking science to the next level

But does it really work?

Many scientists were skeptical about citizen science at first. What if no one put any effort into it? What if they sent back poor-quality data?

If Space Warps is any indication, their fears were unfounded. From the scientists’ perspective, the project has been a huge success. Three months after its launch, citizen astronomers have classified nearly 3 million images — some of which have resulted in published research papers.

With help from students, teachers and citizens, scientists are making new discoveries that might not otherwise have been possible.

“The more I hear about citizen science projects, the more it’s becoming clear that it’s a useful tool for virtually every field of science,” Zych says.

It couldn’t be happening at a better time, either.

“I think there’s been a polarization happening with regard to science,” she says. “With a lot of Americans, science isn’t very popular. Citizen science does play a role in improving the public perception of science. By being involved with it, because it’s real, it adds credibility.