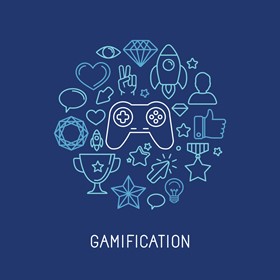 I’m not a gamer, never even owned a console. That's probably why I'd never been very interested in game-based learning and was not excited last spring when I found myself sitting in a professional development session on gamification.

But as I listened to my colleague, Tisha Richmond, speak about how she gamified her high school culinary arts classes, I started to understand the potential. Tisha explained how she took a unit on American cuisine and turned it into the Great American Food Truck Race. Her students collaborated in groups to come up with a food truck concept, managed fake money, served their food to customers (lucky high school staff!) and raced across the map back to their hometown!

I was hooked. In that session I realized that gamification — the application of game-design elements and game principles in non-game contexts — has tremendous potential to engage students. After Tisha’s presentation, I read the book Explore Like a Pirate by Michael Matera and became determined to try gamification in my classroom.

The more I learned, the more I realized that there are numerous ways to gamify your class, and a lot of factors to consider, such as your students’ grade level, your subject area and whether you teach one class all year or switch each quarter or semester. Some teachers choose to start small and select one unit a year to gamify, while others gamify one class or subject for a term.

I teach third grade in a self-contained general ed classroom where I have the same students all year. Our units are integrated, so to gamify just one unit would be too limiting for me as would gamifying a term or semester.

That’s why I decided instead to gamify the entire curriculum for the whole year. It was a large feat but one of the great things about gamification is that you get the opportunity to build the plane while you are flying it! You do need to have the basics worked out, but gamification gives you the flexibility to change your game as you go.

If you’re ready to try gamifying your classroom, here are some basic tips to get you started:

Plan your adventure. To introduce my students to the game, I created a video using iMovie. As my game ideas came together, I created an outline using Pages to organize my thoughts. (Thank you, Tisha, for the idea!)

Focus on theme. Start with a topic that will be highly engaging and offer enough opportunities for action, items and characters. Because the solar system is such a popular unit with my students (and because my last name is Marrs), I felt that Space Exploration was the perfect theme for my class. Other teachers have found inspiration for themes from TV shows, books, games, history and their own curriculum.

Create a story. What adventure will your students be going on? What problem will they be overcoming? Where is the game set and who are they in the story? I decided to call my game Ascension Space Exploration. My students start out as astronaut trainees in NASA’s Ascension Space Exploration program. Earth is quickly running out of resources. To save the human race, they must find another planet similar to Earth.

They are part of astronaut crews who take off on separate shuttles to find a planet that can help them. The crew with the most combined XP — experience points — at the end of the year will be the group that finds the planet. Along the way students have opportunities to level up, go on side missions, take part in mission training, and encounter other exciting actions and obstacles.

Choose game mechanics. Keep it simple at first. Choose a few manageable mechanics — tools, techniques and badges — that you can implement right away, then add more as you get to know your students and the story unfolds. The first game mechanic I chose was XP, or points students earn by displaying good work habits and good behavior. Students use their points to level up and earn special abilities, badges and classroom privileges.

Students start out as trainees but quickly rise through the ranks as they earn XP. You can see the different levels along the right side of my outline below They can earn one level per term or four during the school year. I offer a fifth level to my students who consistently work ahead.

Students earn XP a number of different ways. Those who turn in their assignments and homework on time, model respect and classroom expectations, and arrive on time are eligible to earn the Peer Leader badge weekly, which gets them 100 XP in addition to privileges like being the first go to lunch each day.

Students also earn XP by completing side missions, which are optional projects that students do on their own time but are not connected to grades. XP is open-ended for this task. Students get an amount of XP equal to the effort and creativity that they put into the project.

There are many other game mechanic options like power-ups, boss battles, items, and special character powers that I chose to hold off on at the beginning of the game. I wanted to keep the game simple and straightforward and add to it as the game developed.

Know your audience. It is vital to know who your students are and what drives them. I was creating and planning my game during the summer so I didn’t know my students yet. If I had planned too much of my game, my students might not have responded to it as well as they did.

For example, I knew that my students would level up to astronauts once they had earned 1,000 XP, but I had no idea what they would earn until about two weeks before the first student actually leveled up. I wanted the privileges to be tailored specifically to the likes and wants of my students so that it would be more meaningful to them. It also creates anticipation when you don’t tell them every part of the game right off the bat!

Honor student voice and choice. My students have a voice in directing the game. They have a say in badges that they earn and side missions that they go on. We have a piece of chart paper in the classroom where we write down our ideas for badges and other privileges, such as what happens when you level up. Students offer their opinions and let me know what drives them so they can drive the game!

I also offer a lot of choice in our side missions. I try to give them just a basic idea of what I want from them and then let them run with it. I also refrain from telling them that a side mission is worth any certain amount of XP. Instead, they receive an amount of XP that we, as a class, think is equal to the creativity and effort they put into it. When students bring back their side missions, they get to present it to the class and we discuss the amount of XP together.

Aside from the engagement this fosters, giving students say in how they demonstrate their learning is one of the key components of the Empowered Learner standard within the ISTE Standards for Students.

You can find more information, ideas for game mechanics, side missions, items, badges and more in the book Explore Like A Pirate or by following the #XPLAP (Explore Like a Pirate) hashtag on Twitter. Tisha Richmond moderates the #XPLAP chat on Wednesdays at 8 p.m. EST. This group of educators is always willing to answer questions, share ideas and guide you along the gamification journey.

Heather Marrs is a third grade teacher and ed tech teacher leader at Eagle Rock Elementary School in southern Oregon. She is a wife and mother of two, who enjoys spending time with family, dancing and all things ed tech. Follow her on Twitter @hmarrs24.

4 Ways to Personalize Reading for All Learners

Mar/17/2018
Digital Citizenship, Gamification
Weigh in on the ISTE Standards for Administrators

“Leaders get people moving. They energize and mobilize. They take people and organizations to places they have never…