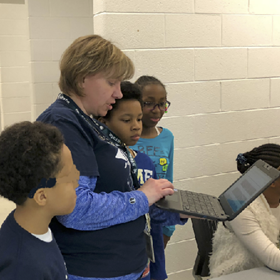 The mission statement of my school in Redford Township, Michigan, is inspiring: “Together students will learn through innovative opportunities and strong relationships.” Coupled with a district vision of learning, innovating and leading, the South Redford School District is poised to prepare students for the challenges of the digital age.

However, attempting to achieve that mission and vision became a challenge last year after the district adopted an intensive, highly structured reading program called Success for All (SFA), which includes one-on-one tutoring, frequent assessments to make sure students were making progress and close data monitoring. While no one disputes the importance of being able to read at or above grade level, SFA limits the flexibility teachers have in their schedules to foster innovation and student leadership.

Enter Lynda O’Donnell, a fifth grade teacher who knew that her students were lacking creative opportunities. O’Donnell wanted her students to model cooperative behavior to help new students feel welcome at school and show others how to be kind and accepting toward each other.

This is where my role as an instructional technology coach specializing in video production came into play. O’Donnell and I planned an instructional unit where her fifth grade students would work together to produce public service announcements to help increase positive behavior.

I started the PSA project by introducing students to the video production process. Working in groups of two to four, students collaborated to develop a storyline for their PSAs. As they developed their stories, they also created storyboards and scripts.

In this phase of the instructional unit, students worked on their storyboards for about 45 minutes twice a week. They were introduced to the plot diagram, capturing the audience’s attention with an engaging storyline. I also taught them how to use a camera to capture emotion in the scene and think about shots and angles that might visually enhance their projects.

Students were reading, writing and collaborating. In fact, they were actively involved in multiple literacy practices.

With this momentum, we moved into the production phase where students worked in different spaces throughout their school and composed multiple forms of media.

Students recorded video and audio over a three-week period using iPod touches, which O’Donnell acquired through grants. Then students uploaded their media files to their Google Drive folders.

Originally, we planned to have students edit their videos on laptops using a web-based editing program called WeVideo. South Redford Schools had purchased a two-year subscription for WeVideo as part of the Next Gen Classroom program.

Instead, the fifth-graders had the opportunity to take a field trip to the nearby high school where they edited video with students at Thurston High TV (THTV). In all, there were 25 elementary school students who, with partners, were matched up with one of eight high school students in my mid- and high-level production classes. Many of the high school students had also been fifth grade camp counselors, so the groups of students already knew each other.

During the editing sessions, the high school students helped students  edit the footage that had already been recorded. It is important to note, however, that all editing decisions were made by the fifth graders.

When each of the 11 films were finished and uploaded as an unlisted YouTube link, we watched them together, and students had the opportunity to provide respectful feedback to each of their peers. Students commented both on the content of the video as well as the production techniques that were used.

One video, which we were given permission to share publicly, on the topic of anti-bullying, shows how easy it is for students to stand up to a bully.

Some students commented on video technique. “I liked the music, but the voices needed to be louder.”

This step allowed for an authentic community of learners to develop, and it turned out that students were really excited about reading and hearing the feedback of their peers, which they then applied to the next video project.

I was thrilled to see how supportive students were of each other. They read all of the captions aloud, applauded and offered thoughtful and helpful comments using a classroom response system (clickers).

Moreover, students learned how to communicate with each other, which organically evolved into a mastery of standards that went well beyond what one might gain from a prepackaged program.

For example, students easily integrated ISTE’s Global Collaborator Standard: “Students use digital tools to broaden their perspectives and enrich their learning by collaborating with others and working effectively in teams locally and globally.” They also addressed the ISTE Creative Communicator standard: “Students communicate clearly and express themselves creatively for a variety of purposes using the platforms, tools, styles, formats and digital media appropriate to their goals.”

Additionally, they met the Common Core State Standard on analysis, digital creation and the use of nonprint texts.

The last and most meaningful step was the opportunity for each student to reflect on the video production process using an app called Flipgrid, which allows students to record short posts from a smartphone, tablet or computer.

We prompted students to think about their entire video production experience and asked them to record their responses. They were articulate, descriptive and highly reflective like this one from Skylar. Flipgrid provided a way for students to reflect in a nonthreatening way; students could first think about their responses and use digital sticky notes to guide their thoughts and keep themselves organized. They also had the opportunity to re-record if they were not satisfied with their first result.

Well, first of all, the students want more.

O’Donnell, her students and I had so much fun with video production that we added another project called The Six Word Story, which has been adapted from Six-Word Story, Six Unique Shots: Enhancing Writing Through Multimedia by Don Goble. Students developed their ideas in one session and recorded and edited their own individual Six Word Stories.

Innovation and literacy do not have to take place in silos. Instead, they can happen hand-in-hand. School districts facing mandates, funding and teacher evaluation laws tied to high-stakes testing results will need early adopters like O’Donnell with mindsets to think creatively about their weekly schedules.

More importantly, the ISTE Standards encourage us to teach beyond the test. SFA is grounded in a different set of standards that are no less important but the program implementation resulted in a loss of autonomy in the elementary classroom. The collaboration that O’Donnell and I developed created opportunities for students to innovate and collaborate.

Innovation, collaboration, discussion and reflection. Yes, it can happen in the elementary schools even when curricular demands seem overwhelming.