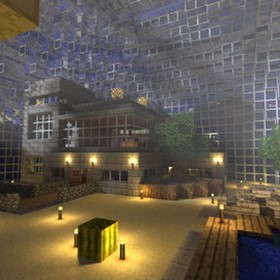 At Punahou School in Honolulu, Hawaii, where I teach high school computer science, I gave my students an assignment to play Minecraft together, hoping it would build community and encourage teamwork in our face-to-face classroom. I asked students to work together in our shared world to build me an office completely underwater according to these criteria:

Divvying up the work

The group of 20 students immediately set out to devise a plan, with every student taking on some aspect of the work. Some naturally emerged as leaders, while others were content to be followers. One student set up his general store as a clearinghouse for supplies, while another created a shared document that listed the supplies they needed to collect. Other students dug sand, built the platforms and created the scaffolding that supported the dome. Still others provided security against the random skeletons and creepers who showed up from time to time, threatening to derail the work.

Next, students had to figure out how they were going to build the structure. We used the challenge-based learning framework, which offers a great process for project-based work. In a class discussion, they came up with some useful guiding questions, including:

We divided into teams to design guiding activities to answer the questions. I built in time during class for students to work together and to present their discoveries to the group. Some students formed a scouting party that traveled the map, looking for the deepest area of ocean. Others researched strategies on the web for staying underwater for extended periods of time and conducted tests to see which seemed the most feasible.

Their final plan was brilliant: Build a wooden platform on the surface of the ocean and construct a dome on top of it out of sand. When the dome is completed, burn the wooden platform, allowing the sand dome to drop to the bottom of the ocean, where it can be covered with glass. Finally, replace the sand with air.

This project took a couple of weeks and involved all students in various phases of the project:

Many students captured video from their various perspectives, and one student edited them together into a movie showing the climactic moment when the dome dropped into the ocean.

The riskiest part of this assignment was letting the students design their own solutions. I had to have faith that they would employ good thinking without direction from me. As it turned out, when I sat back, I left room for the students to step up to offer suggestions and debate ideas.

One moment in particular powerfully illustrated the beauty of letting students drive their own learning. The students wanted to maximize the area under the dome, but they realized that the higher the dome was, the more resources it would take to build it. The group was stymied until one student, who had been quiet up to this point, practically shouted as he rose from his chair.

"Hey, I just realized something!" he said. "Why are we splitting the dome in half?"

He understood that everyone in class — including me as an observer — had assumed the glass dome would be the top half of a sphere, split at the midpoint. He bolted to the board and drew sketches illustrating that if they bisected the sphere closer to the top, they would save considerably on materials, but the area it enclosed would be only slightly smaller. They recognized that, at some point as you moved up the sphere, this ratio flipped and you lost much more area for only a small decrease in materials. Much debate followed about where the ideal point would be.

I was thrilled because I had struggled to engage this student in class all year. But his surprising insight galvanized the class and dramatically improved the design of the dome. After this assignment, he was more willing to take risks and speak up because he felt his contributions were valued.

Overall, the experiment was a success. Although a couple of students drowned and a few others burned up, my new office looked amazing! And fortunately, perishing in Minecraft simply means a long walk back to the job site, where you respawn.

Most of my students could recall group projects or PowerPoint presentations that were mostly done by whichever student cared the most about the final grade. They called these "fake group projects" — where it was obvious the teacher had taken what was essentially an individual project and given the assignment to a group of students, hoping they would collaborate.

"True" group projects, like real-life group projects, are ambitious and complex. They require the diverse talents of multiple people to have any hope of completion. The Minecraft Underwater Dome project was one such project. It required students who could plan, design, build and communicate.

No one student could do everything, and every student was able to contribute something that he or she was good at and enjoyed doing. The leaders directed the process, and the followers did the work. Students needed to know enough about each other to appreciate each individual's strengths.

Every couple of days, students wrote a reflection discussing their role in the community. One student wrote that she realized that there was a place for leaders and followers in society. You couldn't have too many of one or the other; you needed a healthy balance of both.

When I proposed the challenge, I wasn't even sure it could be done. But I had faith that my students could direct the process and had the ability to get the job done in their own way. This led to truly profound collaboration and a memorable experience for all. As one of my students later wrote, "I'm really surprised with how well we were able to come together as a team and actually build it. I thought it would take so much longer and we wouldn't have a structured idea of how to build it. It turned out so much better than I thought it would. So, I'm proud of everybody for that."

Douglas Kiang is an Apple Distinguished Educator with over 20 years of teaching experience at the elementary, middle and high school levels. He teaches computer science at Punahou School in Honolulu, Hawaii, and holds a master's degree in technology, innovation and education from Harvard.

This is an updated version of a post that was originally published on September 15, 2014.