What happens when kids make their own makerspace? 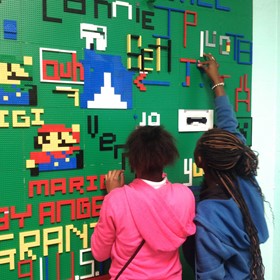 It began as a donated box of K’nex set out on a library table.

Bit by bit, the makers who came in helped her decide what to add next: Snap Circuits. Legos. Rotating craft stations. Each time she added something new, she’d say, “Let me know what you think.” So they did.

“I really wanted it to be their space,” she said.

Before long, about a dozen students had volunteered to form a makerspace planning committee, whose input played a key role in shaping how the space functions today.

It’s the opposite of how a lot of schools do it. A blogger and leader within the maker education community, Rendina has seen many educators pour money into adult-designed, adult-driven makerspaces without much (if any) input from students.

“It might be a really great space, but if it’s not what the kids need and want, then it’s just not going to work as well,” says Rendina, winner of ISTE’s Outstanding Young Educator Award last year. “You need to remember that the makerspace doesn’t belong to you. It belongs to your students.”

Here are five ways students at Stewart Middle Magnet School have taken ownership of their makerspace:

1. They shaped its conception.

In its early days, the makerspace consisted of several bins of supplies set out on lib rary tables. Anytime there was an activity going on — book fair, picture day or a class —the materials had to be put away.

“My students wanted to have access to the makerspace all the time,” Rendina said.

Their solution: Designate a corner of the library to serve as a permanent maker corner where a few supplies, such as Legos and K’nex, would always be available. When one maker expressed a wish for an always-available art space, the committee opted to cover one wall with whiteboard paint for doodling and drawing on.

2. They designed and built it.

As they started making plans for their maker corner, students walked through the library with Rendina and brainstormed the best way to make use of its space. When she had some ideas for moving the library’s social corner, for example, they gave vehement feedback.

“Having that input from them helped a lot,” she said. “If I’d put the social corner somewhere else, I don’t think it would be used as much.”

Student volunteers even did some of the renovation work, such as choosing paint colors and helping to build a Lego wall for their maker corner.

3. They organized supplies and created procedures.

When you’re filling your makerspace with tinkering tools, many questions arise: What’s the easiest way for students to select the pieces they want to work with? How do you keep smaller pieces from getting lost? When, where and how will students access the supplies? How do you make cleanup as easy as possible?

4. They keep an eye on things.

If students feel like they have ownership and voice over their makerspace, “they’re going to take care of it and they’re going to keep a watch over things,” Rendina said.

One problem the student committee members discovered early on was that some of their supplies were more intuitive to use than others. Anyone could pick up Legos or K’nex and start building with them, but the Snap Circuits and Makey Makey kits weren’t as easy to figure out — even with written instructions available.

“The kids had told me they noticed some kids were just kind of goofing off with the supplies and not really trying to do anything constructive with them,” Rendina said.

After several Snap Circuits ended up missing or broken, they had to make some tough calls about which supplies to keep out all the time and which items required closer supervision. They repurposed a storage room to house the more challenging makerspace supplies so students had to intentionally seek them out if they wanted to use them.

5. They challenge each other.

Makers at Rendina’s school regularly participate in design challenges to help them focus their tinkering efforts. Sometimes students come up with challenges for each other. One maker proposed a creature challenge in which everyone builds a creature that does something, using any materials they want.

Now that the makerspace is fully operational, the planning committee has been demobilized. Instead, a student leadership crew comprising volunteers from each grade level keeps an eye on the maker corner and helps plan new initiatives for the library.

“I see a lot of inclusion,” Rendina says. “It’s a space where they’re all working alongside one another. I like how the space gives them all a place to be creative and express themselves.”