If you can dream it, you can do it with ed tech 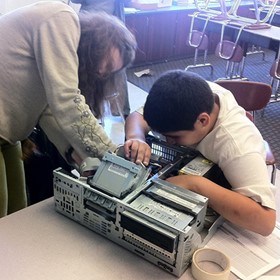 Robert Pronovost was recognized as a 2012 ISTE Emerging Leader. Nominations for 2015 awards are open now through Feb. 2015. Amazing educators encouraged to apply!

Robert Pronovost is on a mission. His goals are to prepare students for high school's digital culture, share tricks of the trade and persuade businesses to support education — all while improving his own teaching methods.

" "I am in constant pursuit to improve my practices," " says Pronovost, who worked as a second, fourth and sixth grade teacher at Belle Haven Elementary in Menlo Park, California, before taking on the role of STEM coordinator and technology integration specialist at the Ravenswood City School District.

Back when he was a teacher, Pronovost lived by the motto: " "If students can dream it, we will do it." " He admits that this was a leap of faith, considering that some of the technology was as new to him as it was to his students. As students watched him learn, they became more willing to take risks themselves.

You might consider a school district in the heart of Silicon Valley to be one of the most likely places to dream it and do it with technology. But that wasn't the case when Pronovost, who was an ISTE 2012 Emerging Leader, first took a teaching post in 2007. Technology companies surround the school, but the classrooms were outdated. Even though Belle Haven had a relatively new computer lab, it lacked funding for a computer teacher and technical expertise across the school. Meanwhile, surrounding districts were rolling out iPad and laptop carts, and their students were engaging with interactive whiteboards and sharing news by Twitter and Facebook. Pronovost knew that he and Belle Haven had to prepare students for a world immersed in technology — especially those who might go on to attend high school in tech-savvy districts nearby.

" "As an educator who feels comfortable with the evolution of our digital culture, it's my responsibility and privilege to support my students, their families and our school to be prepared for the technological direction we are heading as a society," " he says.

It was this feeling of responsibility that led Pronovost to reach out to numerous companies, including Apple, Microsoft and Luidia, to secure computers and interactive whiteboards for the school. He also led trainings for his colleagues. In 2008, with sponsorship from local companies, Pronovost started the Belle Haven chapter of MOUSE Squad, a national after-school youth technology education and training program. This resulted in 50 laptops for K-3 thanks to a partnership he and the squad built with Facebook. Tyco Electronics also supported the program.

" "In our MOUSE Squad, students truly began understanding the technology they use and developing the responsibilities that come with being digital leaders," " Pronovost says.

The MOUSE Squad helps teachers start using technology by solving technical problems and demonstrating how to use technology effectively in class. Getting teachers the tools they need is one of the ways Pronovost is working to close the digital divide.

" "Digital equity is definitely an important part of what I do," " he says. " "Some teachers currently only have an overhead projector with pens, if that." "

When Pronovost isn't facilitating workshops, presenting at ed tech conferences or mentoring his colleagues, he enjoys supporting and challenging the like-minded educators he has come to know. Part of that includes sharing what he has learned through YouTube videos and engaging with ISTE members.

" "I try to share what has and hasn't worked for me to support the educators in my community who are seeking their own self-improvement," " he says.

Paul Wurster is an ISTE editor based in Eugene, Oregon.

This is an updated version of an article that first appeared in the August 2013 edition of Learning & Leading with Technology .