See how one educator transformed learning for disadvantaged children 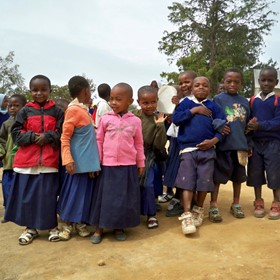 This is an updated version of a post that published on April 26, 2015.

California teacher Kristy Andre helped introduce technology to a small school in South Africa but returned to California with something even more important — proof that technology can transform the educational experience.

In 2011, Andre worked at Bridges Academy, a boarding school near Cape Town for about 60 orphans and vulnerable children in grades 7-12, as part of the nonprofit organization Bridges of Hope International. She taught multiple subjects to seventh through ninth graders, and most of her classes had only 10 students in them.

Although Bridges Academy had only about 10 old laptops in total, Andre could see the possibilities. She applied for the school to become a Google Apps for Education institution so students and staff would have a way to communicate with each other and easily share their work.

Andre introduced her students to digital storytelling as well as ClassDojo, a schoolwide behavior management system. She raised money to purchase two projectors, computer speakers for every room and 10 used iPod touches, which the boarding students used during their homework time.

“I could see a difference in my students right away,” Andre said. “They were excited to come to class, and they understood the concepts more because they were able to go back and review them. I took a video of homework time one night, and my students were completely engaged in their homework compared to the rest of the students. They are teenagers who live together, so it is hard to get them focused.”

To ensure that the technology continued to work after she left, Andre made screencasts of tutorials for the staff and posted them on the school’s YouTube channel.

Engaging students in their own learning

Before going to Africa, Andre was familiar with the use of technology to engage students in their own learning processes. As a new teacher, she started with fourth and fifth grade at Tustin Unified School District in Irvine, California. When she got an interactive whiteboard in her room, Andre quickly realized that it wasn’t a glorified chalkboard, but a tool to empower students in their learning.

“[The whiteboard] opened my mind to different possibilities,” Andre says. “I started trying to do lessons where I wasn’t using the board but rather the students were the ones interacting and manipulating the board. The board became a student center where they could collaborate and think.”

A couple years later, Andre got eight computers for her room. That’s when she discovered digital storytelling. She had her students write, then use digital cameras and Photostory, Microsoft’s free video-creation software, to tell their stories. The project motivated her students to write because they knew their writing would be turned into movies.

After seeing the videos, Andre says students were determined to become better readers and better writers because they really wanted to make their movies good. And it paid off. Her students were invited to display their work in the Student Technology Showcase at the annual Computer-Using Educators (CUE) conference in Palm Springs, California.

Whether in Africa or California, she says technology helps students collaborate, create, think critically and communicate to the world. For that reason, she says, technology belongs in every classroom.

“I miss my students from South Africa every day,” Andre says. “They push me to want to be a better teacher. I get excited to work with teachers that are a little apprehensive about the technology because I know how much their teaching is going to transform.”

When Andre returned to California, she became a digital learning coach in the Tustin Unified School District. She now helps teachers learn how to implement technology to inspire and engage their students. That, in part, is what led her to be recognized as an ISTE Emerging Leader in 2014.

In her heart, Andre wants to ensure that all students have access to technology regardless of socioeconomic status and that teachers feel supported. “Devices don’t teach students,” she said. “Teachers teach students, and if we don’t support them, then we risk the tech being underutilized.”

Watch the video she made below to see how technology plays a positive role in learning and teaching.

Jennifer Snelling writes about food, travel and education. She lives in Eugene, Oregon, with her husband, a cat named Pickles and two elementary-aged girls, whom she loves for their innate understanding of technology and for many other reasons.

April is Advocacy Month. Learn how you can stand for ed tech like Kristy Andre and enter a drawing for a chance to win a $100 Amazon gift card.