Soledad O'Brien: Tech is the next civil rights battleground 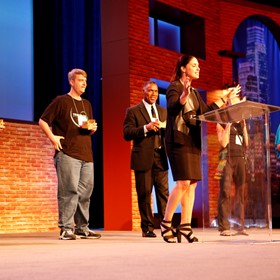 “Educators are on the front lines of a critical battle for access and equity in education. It’s not a small opportunity. Do not give up on kids who need you.”

Bold statements like that caught the crowd’s attention during journalist and Starfish Media Group CEO Soledad O’Brien’s ISTE 2015 Opening Keynote address and inspired new perspectives on the impact of technology in the classroom.

O’Brien’s impassioned examples stem not just from a portfolio of on-camera interviews through the years, but from her own family history. After all, her Australian father and African-Cuban mother couldn’t go to a restaurant in Baltimore for their first date in the 1950s, since interracial couples were illegal. So she grew up on the cutting edge of blended families and knows “there’s special bravery in sitting on the right side of history.”

O’Brien considers education the next civil rights issue. Schools, she points out, have a new chance to do more than program desktop computers to curse, as she did in her youth. Tech tools like the iPads her own children have had since kindergarten, she said, are a chance to change the world.

Take, for instance, Lavon Longstreet, a 7-year-old student who was enrolled in four schools before second grade and couldn’t read the word “the” or sound out one-syllable words when O’Brien sat down with him on camera several years ago. Statistics show that if students can’t read at grade level by third grade, odds are high that they will drop out around seventh grade, and dropouts feed a large portion of the jail population.

O’Brien also told the story of Maria Costas, an exceptional student in Phoenix, Arizona, who never realized her dream of going to Stanford University because her school didn’t offer a calculus class — until she campaigned for one. Unfortunately, just one course wasn’t enough to propel Costas through the admissions process.

Technology, O’Brien points out, would ensure that students like this could have a level playing field. “Education shouldn’t be a crap shoot,” she said.

But there is one area where she puts her foot down. "I might be in the wrong room to say this, but I think technology for technology's sake is a complete waste,” she told the crowd. Instead, digital learning in children's hands should be used for voice, agency, social justice and finding passion.

She learned through the scholarship program she and her husband established after Hurricane Katrina that handing out tuition is not the key to higher education. It’s mentoring, and that’s where technology shines brightest. “It’s become an obsession of mine,” confessed O’Brien, whose Starfish Foundation works to show young women what is possible beyond nursing and social work in the real world.

As a demonstration, O’Brien selected audience members to come up on stage. Using a new virtual reality product just out of beta called Google Cardboard, she treated them to a glimpse of a veterinarian performing a procedure on a cat.

O’Brien closed Sunday evening’s talk with a plea for attendees to leverage their conference sessions in the coming week for not just today, but tomorrow. “A technology gap is more than just that,” she said. “It's an information gap for students.”