To make is to learn: A Q&A with Dale Dougherty 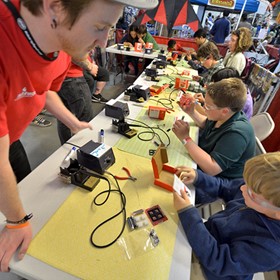 There's something missing from schools, and Dale Dougherty thinks he knows what it is.

It's the opportunity for kids to connect their minds to their hands and follow their curiosity about how things work — in short, to grow into a society of makers and tinkerers rather than consumers.

" "I see the maker movement as a social movement, a cultural movement that aspires to invite as many people to participate as possible," " said the founder and CEO of Maker Media, which produces Make magazine and the annual Maker Faire .

Dougherty admits to having a secret agenda: helping people wake up from their consumption-driven trance.

" "I want to see a culture where people have access to materials and tools that make them feel like they're in control of their world," " Dougherty said.

Although the maker movement's momentum has been largely powered by its growing community of do-it-yourselfers, Dougherty has played a key role in organizing and curating the phenomenon. Now he's ready to help it spread into schools, libraries and community centers across the world.

Watch his recent EdTekTalk at ISTE 2014 about why it's vital to bring making back to schools, and then read on as he shares his perspective on how making impacts learning.

What can the maker movement teach us about education?

Dougherty: I think one of the things we see so clearly from the Maker Faire is the high degree of interest from kids. They want to participate. They want to become makers. Part of my mission is to ask, " "How can we help them?" "

Kids are saying they want to learn more about technology and science, but they also want to see it creatively and use it personally. One of the ways we can do that is creating more makerspaces for kids, and part of my goal is to lead the charge in saying, " "Let's build more makerspaces inside of schools, libraries and even community centers!" " Whether they're in school or out, kids need this.

I think technology-oriented educators need to look at this as a new kind of mission. We know kids want to do this. I think we also know it's missing in their lives.

What makes a makerspace?

A makerspace could be an art studio, a biology lab or a computer lab. It could be all of those things mashed up together, because you want kids to do art, music, shop and use computers, but you don't want them to do it in silos. You want to allow interdisciplinary exploration. Any good problem should be looked at from different angles.

I'm a big advocate of making do. Just get something going and declare it. How did we get school gardens? There wasn't a federal mandate, and there wasn't a lot of money for it. It was parents and community members showing up in schools and saying, " "We'd like to build a garden." " The administrators didn't say no very loudly so they just kept going, and now we have school gardens tended and cared for both by the community and by the schools. Although they started without curricula or formal support, now you have both of those.

What does the maker movement offer that schools typically don't?

Education is not a preparation for life — it's life itself. We're talking about people becoming good learners and doing it their entire lives.

What's exciting to me is that at the grassroots level, teachers are coming to Maker Faire and getting inspired to go back to their schools and try this. We also have a Maker Camp, now in its third year, which is a youth-oriented online summer camp that connects to about 500 physical locations where students can go and take part.

What role does technology play in the maker movement?

I've always thought of making as being about using tools. It's also about making tools. You're using materials and tools to make something. You're recombining things. I don't particularly care if kids are getting started with cardboard and newspaper. Origami is a great way of making.

What does excite kids these days is that there are new technologies like 3D printing that make it easier to make more complex things. This has two impacts: It gets people's attention, and it empowers them to do new things they might not have been able to do unless they had experience in particular area.

Technology can accelerate making. For example, technology makes it possible to form communities online, which has been an important part of the origins of the maker movement. You can put up photos or videos about what you like to do, and other people can learn from them. You can connect to other people who are making.

What do you see happening to kids when they start making?

Making opens the door to their own curiosity, their own sense of discovery and exploration. Take launching a rocket, for example. If you've never done it before, you're discovering how to build a rocket and launch it. It's fun and engaging because it's something you've never done before. If you did it a hundred times, it wouldn't be as fun.

As you build the rocket, you start to ask lots of questions: How high can it go? Could it go higher? Could I build a better rocket? The point isn't even to just launch the rocket, it's to understand what the rocket is doing. You try different designs and see what they do.

What's the difference between making and other types of hands-on learning?

Often when kids do hands-on learning they're all doing same thing. It's kind of predicted what the outcomes will be, and individual outcomes are pretty much all the same. But any problem rich enough has multiple possible solutions and multiple dimensions to it. You would expect different people who are approaching the problem to approach it in different ways.

Making offers divergent learning, or trying out different approaches to something. Children all start from a different place. To me, a lot of our science has ended up looking like a chemistry class: You go to the lab, follow step-by-step instructions and everybody gets same answer. But you're not engaging in the process, which is where the juice is, the life, the learning. Understanding, thinking, trying — these are at the heart of experimental play.

Making is very playful. It's something you can make a mistake at and it's part of the process. You didn't get a wrong answer; you tried something and it didn't go the way you expected. If adults are honest about the world, we don't have all the answers. We try a number of things and go down a lot of paths, some of which turn out to be productive and some of which don't.

It's about developing an experimental mindset. Makers are a community of experimenters who try things. Some don't work, but they keep going.

Nicole Krueger is ISTE's inbound content strategist and lead blogger for the ISTE Connects blog. A former journalist, she has more than a decade of experience as a news reporter and professional blogger.